The pictures that accompany this post were taken in mid-January this year, but they languished on my hard drive until I felt I had a better handle on my photography system. I made a lot of changes in December and January. But more about that later — Tio Miguel deserves our attention first. 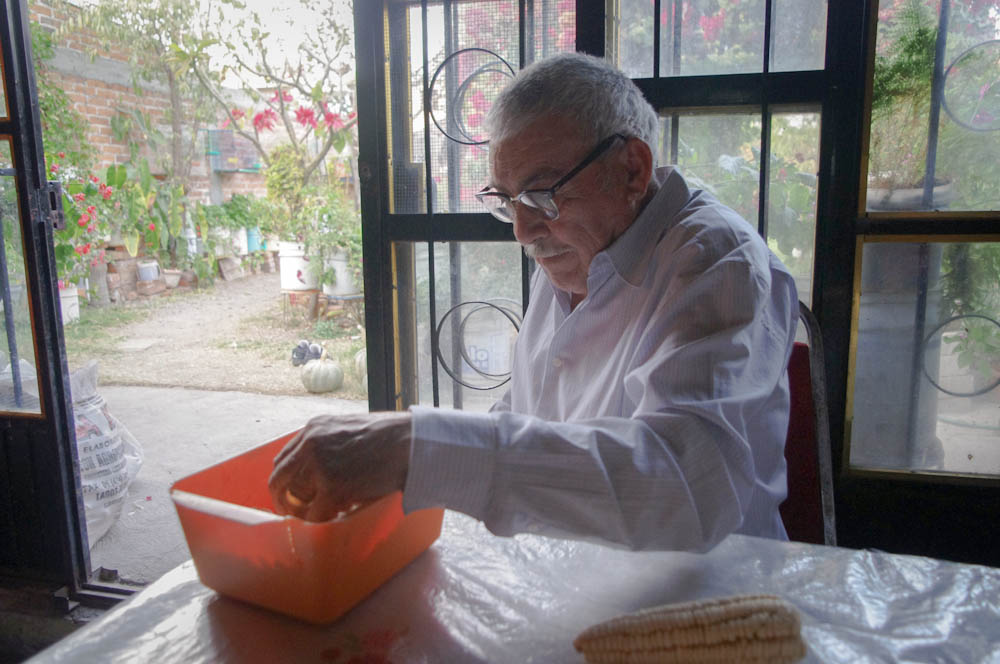 Tio Miguel is Lupita’s brother and one of the most respected members of our family in Cueramaro. His warm smile, generous laugh and gentle, caring manner immediately comes across to you when you meet him. He is tall, at least for people of his generation in México, his hair is white and his eyes can be both sparkling and penetrating. He and I became friends the moment we shook hands, but I am by no means an exception. I believe he would be a friend to anyone who was open to the idea and honest. It is just his view of the world — we should all be open to friendships and sharing our lives. 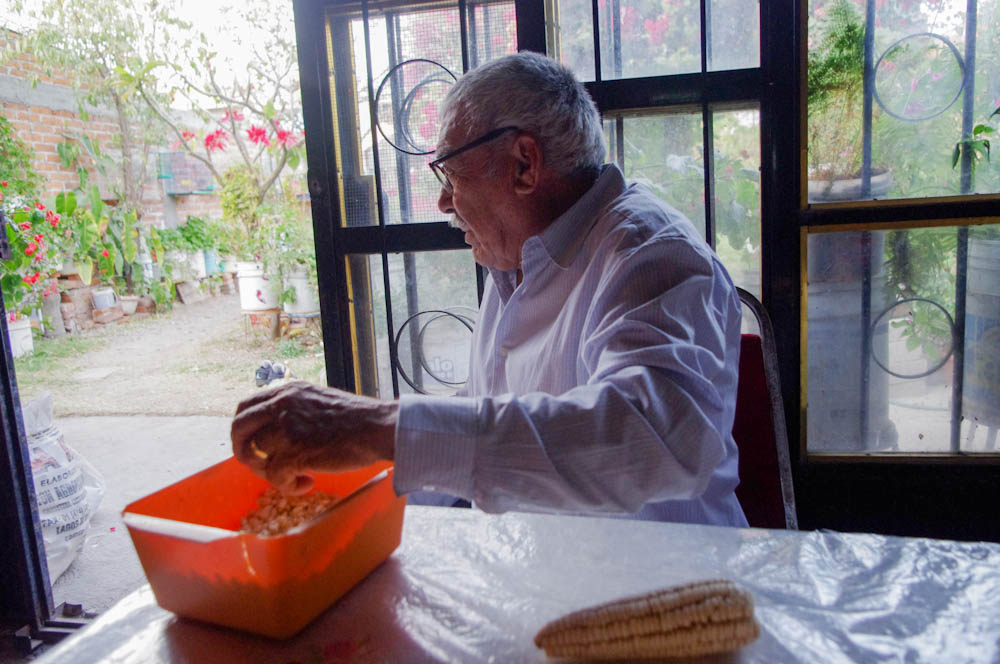 His home is several blocks from ours, but he stops by often. He walks all over town and I’ve seen him and his wife on their way to mass many times. I don’t get over to his house nearly as much as I should — on weekends when I visit, sometimes I’m just seeking some down time — too often I am tired from a long week and just want to take it easy for a day at our home in Cueramaro.

So, during the time Rey and Lupita were home, we took some time to be with family. This was just one of those days — a simple afternoon — enjoying the company of family and exploring their garden with my camera. I had just gotten comfortable with using it in a wide variety of light and the fading afternoon in the garden provided many opportunities.

Because of my background in photography, I find it hard to simply accept what the camera puts out without any editing or modification. With the experience of what could be done in a classic darkroom setting, I enjoy creating my vision of a photo rather than a simple reproduction of a scene. I haven’t been fully able to do that for a long time and now I can do it without the smell of chemicals and expense of paper and time to test different ideas. Now, we can do all of that digitally. It’s a new world.

In December, I moved from a simple point-and-shoot digital camera I have been using for many years to a full DSLR – a Pentax K-r. At the same time, the digital processing system I had used for equally as long was showing its age and simply couldn’t bring the best out of the RAW Digital Negative format I could set my new camera to use. I tried several different applications, but until I tried the new (beta) version of Adobe Lightroom, I didn’t find anything that really had the flexibility and workflow I wanted. In January, when I took these photos, I still had not arrived at a system that I was comfortable using.

Going back now to process them, I saw some things I would do differently with the camera but overall, I was pleased with the capabilities I have gained. My processing system is completely Apple Mac centric, but now consists of Lightroom, Name Mangler (for renaming the DNG files as they come off the camera memory card), and CameraBag 2 (for special effects when I just want to play with a special look). Along with my writing system (Scrivener — which I am using at this moment to write this piece), I’m now as comfortable as I have ever been with my creative tools in the digital world.

The picture of Tio Miguel is an example of one I would never be able to take without this system. The difference in light levels between outside and the dim, natural light at the table where Miguel was sitting is at least five stops. Without the RAW digital negative in my camera, no amount of processing could bring out the full range of detail. The detail just wouldn’t exist in the original. But even then, without post-processing in Lightroom, the version you see now would still either have the outside as completely “blown out” highlights with no detail or Miguel’s face would be completely dark. The range of light in the original is too long to reproduce what I saw without some manipulation. The flowers in the last photo are the opposite case. The light level on the flower bed was low and gave the original scene a flat, unremarkable quality. It was just a simple recording of what was there. That isn’t what I saw in my mind’s eye. The contrast and balance of the white star-like shapes against the dark green foliage with the small, light green vines curling through it all is what I saw and can now show you.

We don’t often talk about vision versus reality in photos.  When it is mentioned, it is often with ridicule. The detractors say, “That isn’t real! It’s manipulated,” or worse, “It’s Photoshopped.” Frankly, I don’t care. I want to see what is in the photographer’s eye, just like I prefer to read authors who sweat over their own vision of their work, rather than something just ground out for a mass audience.

The past months have been a journey to a new, more creative point in my life (finally!). Thanks for joining me. Stick around. We’ve got some fun places to go and I’ve got some stories for you… 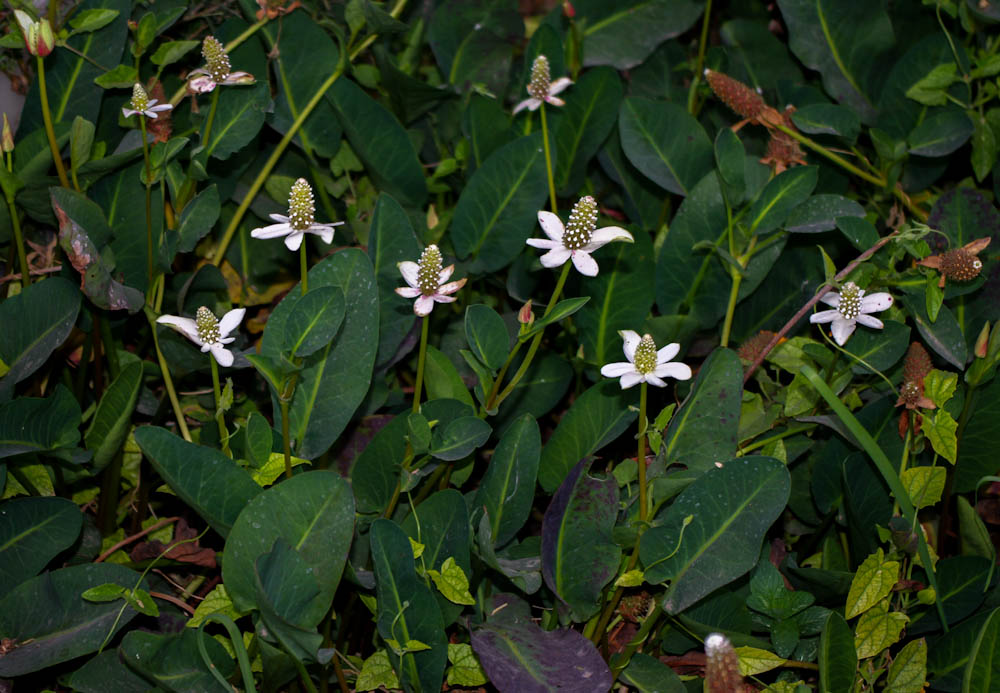