It’s a Saturday morning. I’m in Morelia, in my apartment, writing. The sun is brilliant against the wall outside the kitchen window. The sky is clear and as blue as it can be. The birds that roost in the vines above the back patio at night were participating their morning singing competition long before the sun was up. I didn’t sleep as late as I wanted to, but the birds didn’t have any part in my early awakening. I had too many things going around in my head.

The last two weeks have been busy. I met some new friends from New York who have a home here they are getting ready to move into after several years of renting it. I visited a company in Leon and our home in Cueramaro over the past weekend and all week I have been working on new projects and services. I’m getting ready go to Bellevue, Washington for a business trip in a week. My life is many things here, but is it not dull. 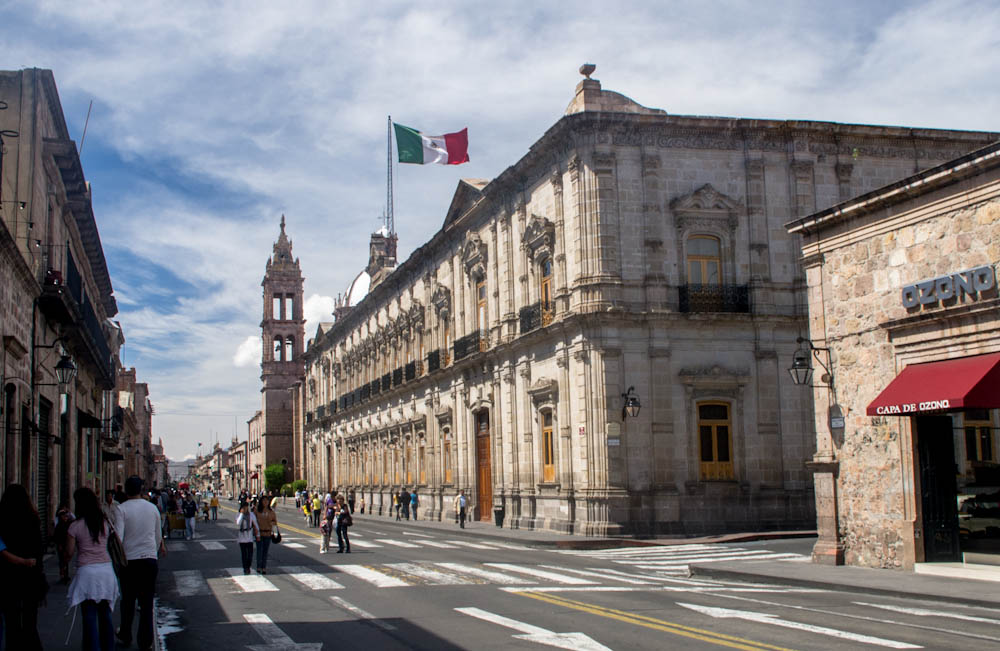 Walking down Madero on a Sunday morning in Morelia. That was the federal building in the center of the photo – now it is a beautiful library. The flag is appropriate. This was the day before Flag Day in México.

Living in México, especially here in a mid-sized city, does change your perspective on life.  Life runs at a different pace – not slower really – it’s just that priorities are different. We have traffic jams on the boulevards during Friday rush hours just like any major city. In comparison to México City or Los Angeles, they are minor irritations, but we complain about them just the same.  We compensate by going to Centro on a Sunday morning when the most important thoroughfare in the city, Madero, is blocked so people can walk, ride bikes and just enjoy a beautiful, leisurely morning. 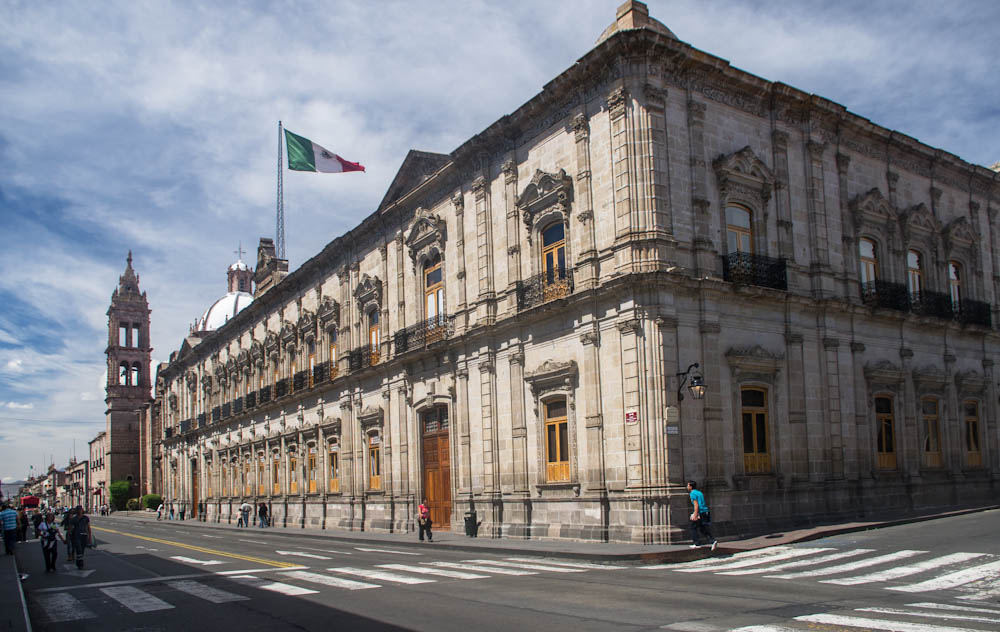 Another view of the library as I continued walking.

A couple of weeks ago, that is what I was doing when I took this series of pictures. I got to Centro a little before the streets were due to be reopened for the afternoon. It was nice to be able to walk where I wanted to take pictures and for most of the time, without cars in the way. If I wanted to walk into the street to catch the certain point of view, I could just do it. Liberating… 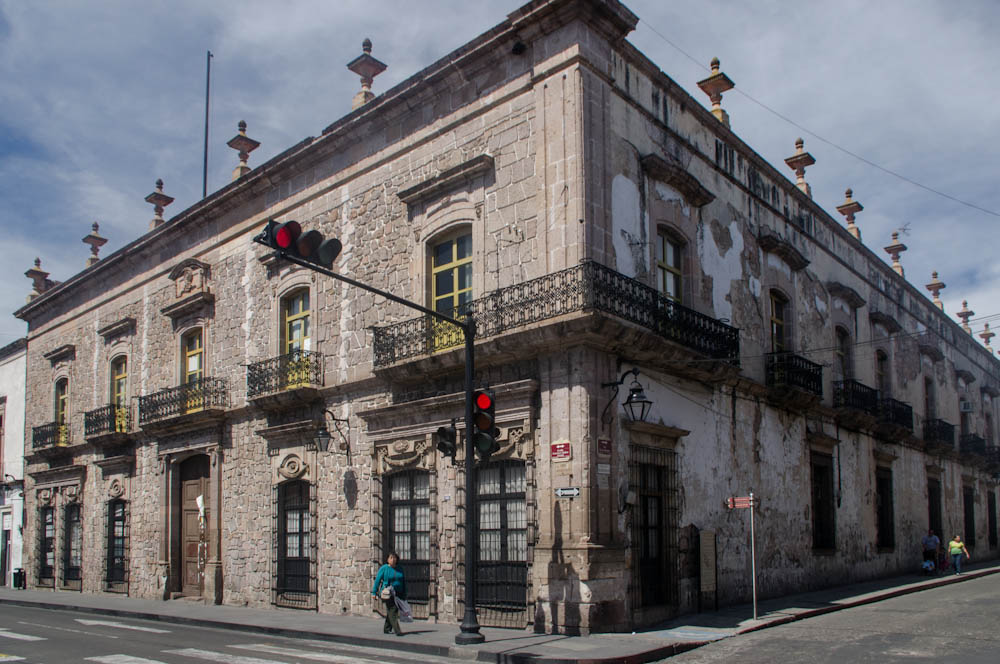 It is just as picturesque as it looks…

Looking back at the same building from a different point of view. Cars are just starting to join us on the streets now.

I’m getting even more comfortable with my photo “development” tools now and these pictures are the first opportunity I have had to exercise perspective control over my pictures since I left the world of view cameras many years ago. View cameras have lens boards and film (or sensor now) backs that can tilt and swivel. This allows a photographer to compensate for those occasions when the camera is, as an example, on the street pointing up at a tall building. As you can imagine, this makes the building appear to lean away from the camera and to cause what should be parallel lines in the building to converge dramatically.  With a wide-angle lens, it can also cause a distorted bulge in the middle of the picture when the subject is wide and closer at the midpoint. All of these “problems” can be used as dramatic effect, but when you just want to show a scene as your eye sees it, you need a way to correct the distortion. Generally, hand-held cameras are not designed to have tilt and swivel, so the compensation was done during printing with an enlarger or print frame (or both) that had this capability.

This building is quite unique and the lines show off what happens when you adjust perspective. This was taken with my zoom wide. 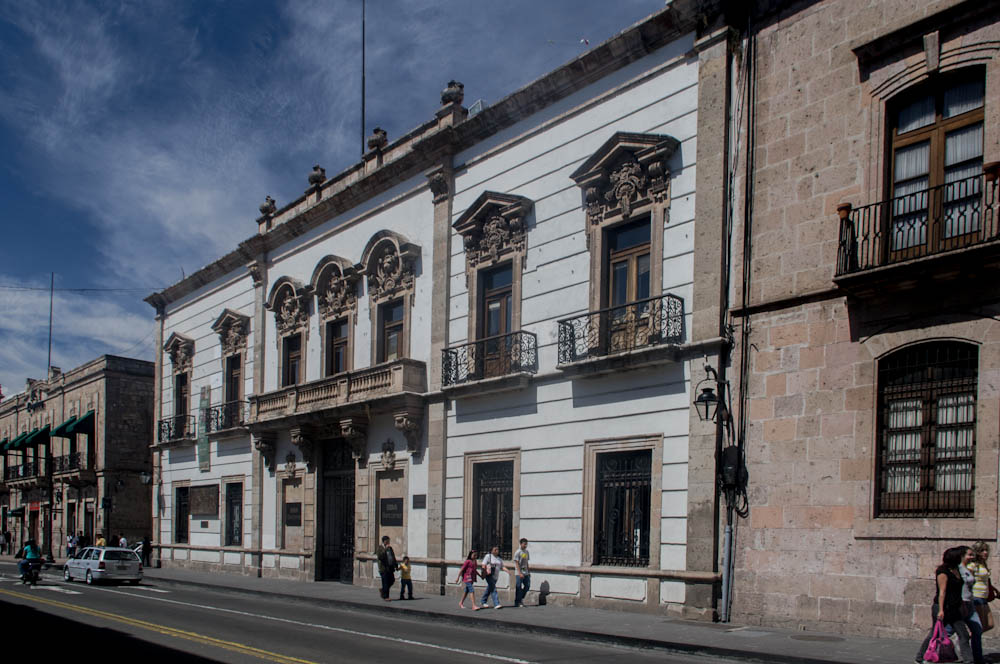 In the world of digital photography then, to achieve the same results, we need our processing tools to have the same capabilities found in the darkrooms we used to use. For me, using the distortion and perspective correction in Lightroom was quite satisfying. Most of the time, it is hard to see that correction has been applied to a picture when you are just looking at it without any context. I’ve included a screen shot of the comparison view from Lightroom to give you an idea of what is happening. I learned a lot playing with this photo and it reminded me of what I heard a friend say many years ago. A lot of these adjustments are subjective. You might change it one way and look at it tomorrow and say, “What was I thinking? That is horrible.” It can take several tries before you find a compromise you are pleased with. The important difference in this process though is that there is no final image or even copy image unless you make one. The manipulations are all just “recipes” that can be altered at will without saving any changes to the original image or any new saved image. That saves a lot of storage space when your output image might be 30mb in TIFF format. 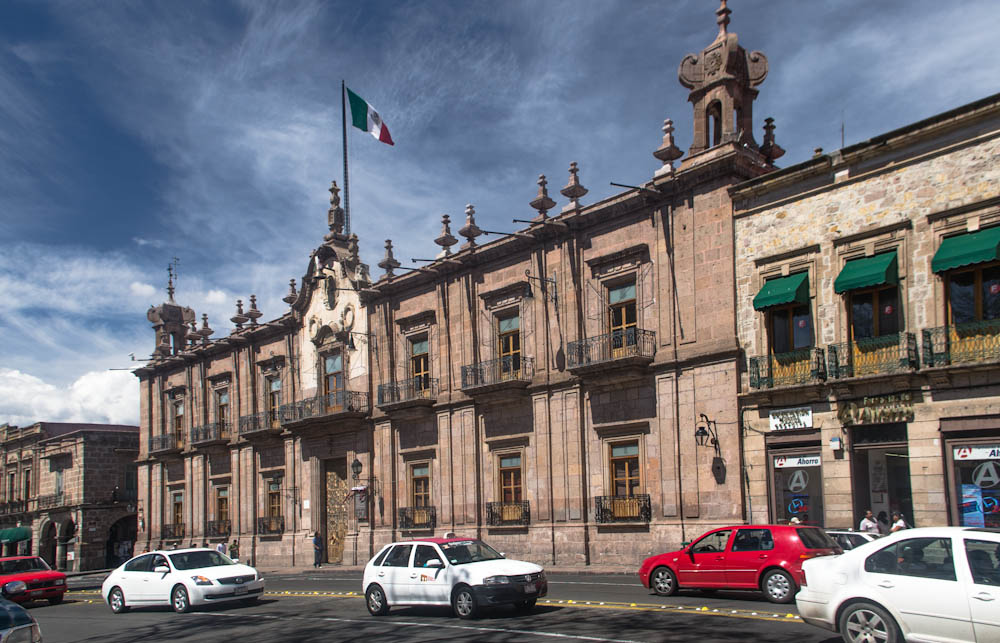 The governor’s palace, across from the cathedral. 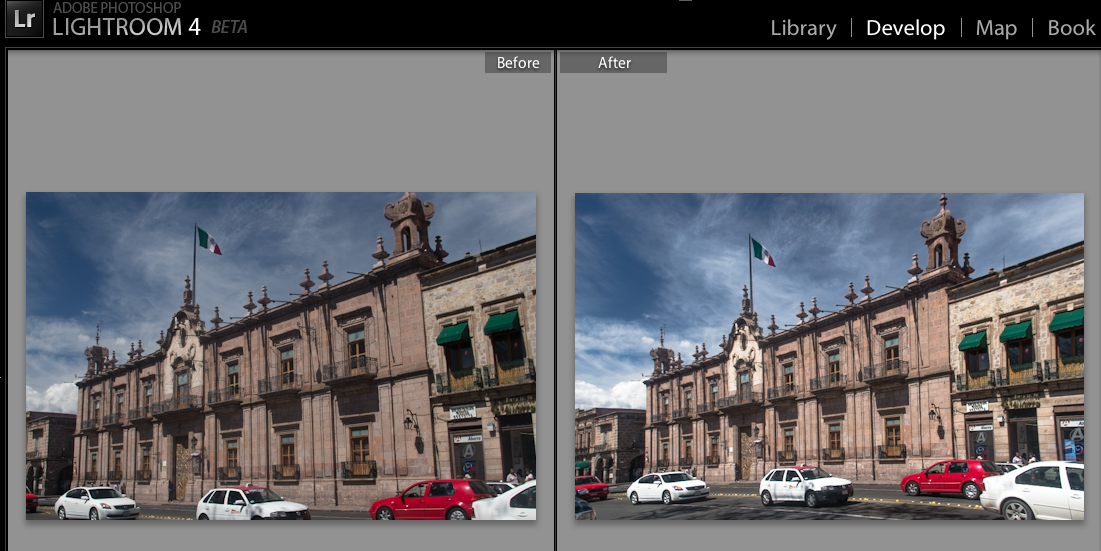 A screenshot from Lightroom showing the original on the left and the modified picture on the right. The difference in the cropping is showing how changing perspective changes the field of view in the result.

But of course, I don’t just spend all my free time running around taking pictures and processing them (thankfully). Later that day, after meeting with my friends, I decided to stop at Restaurant Villalongin at the corner in Morelia’s Centro where Madero and Acueducto meet at Jardin Villalongrin. I’ve walked by this popular restaurant many times and always wanted to try it. I’m glad I did.

It was late, so I wasn’t expecting much. There were only a couple of tables with guests and the kitchen was gradually breaking down and cleaning up. The menu includes most of what you expect in a Mexican parilla (grill) – not a lot of choices – but the standards are all there. I chose one of my favorite “comfort foods” – alambre. Alambre isn’t something we see often in US Mexican restaurants. I don’t know why. Maybe it is because it is more of a method than a specific recipe or because it really isn’t a method that transfers easily to home cooking. It is often made from arrachera – the thinly sliced meats used in parillas as the basis for all sorts of delicious grilled meats and tacos. It is most often beef, but it can just as easily be chicken, pork or even all vegetable. It usually includes grilled pasilla chilies, onions and nopales but it can include a wide variety of meats and vegetables. In fact, in addition to a few standard mixtures, many restaurants that specialize in alambres just have a list of possible ingredients and you can select what you want in yours.

Alambres are prepared on a flat steel grill, all the ingredients added at the proper time to give it all a rich browning. In some places, you can sit beside the grill and watch the chef cooking much like you might see in a Japanese-style table grill at a Benihana. Mexican chefs use different tools, but the flipping, tapping and scraping used in the process is much the same. When it is done, it is served with fresh tortillas, garnishes and salsas.  The number of garnishes and salsas vary, but generally the more the restaurant pays to the salsas and choices offered, the better the parilla is considered to be. A nice dark beer goes well with your alambre… 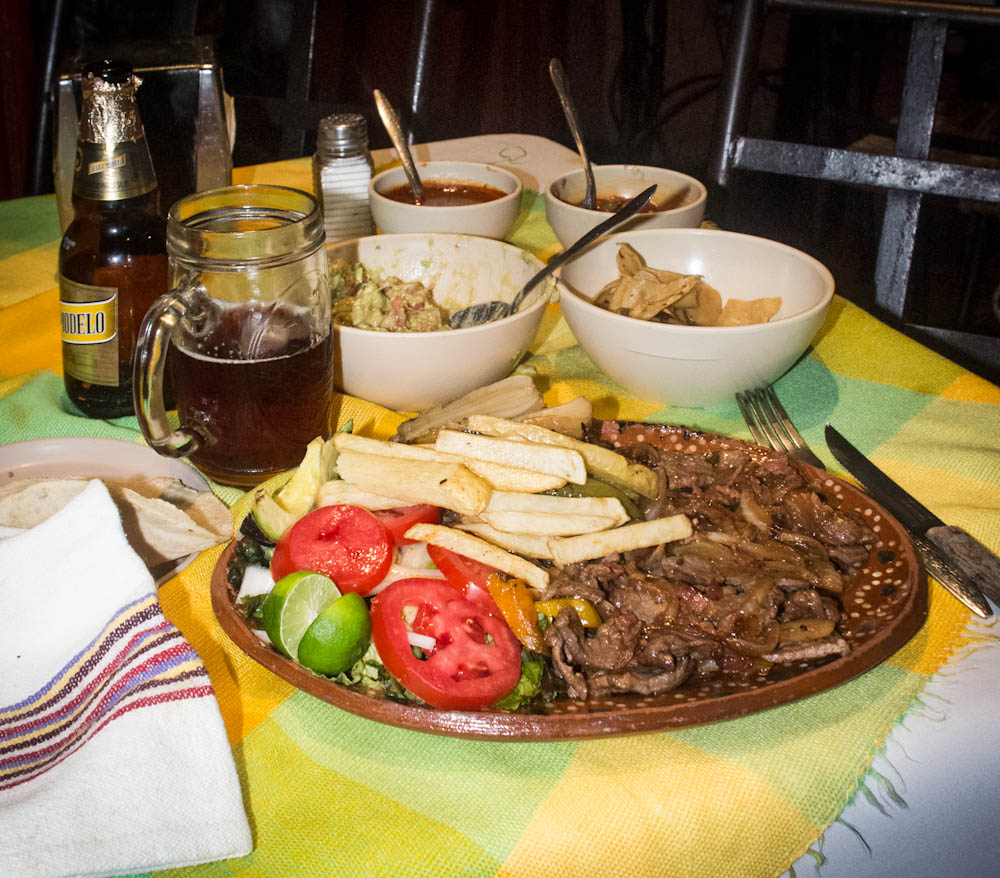 A late dinner at Restaurant Villalongin in Centro. Alambre de Res with all the garnishes(!!!), fresh tortillas, guacamole, Negra Modelo, and assorted salsas. Oh My!

I also ordered guacamole, while I was waiting. It’s best to have patience when you order alambre, good food takes time. The plate that came when the alambre was finished was huge. I was overwhelmed, but I took my time and enjoyed sitting outside, in the late evening, looking at the lights and people walking through the park. Several little cafes and restaurants are in the area, so it is a nice place to just relax. It isn’t “high cuisine” or “artisanal” cooking, but it is good and not expensive. My entire meal and beer cost me 115 pesos – about $8.50.

Last weekend I was in Cueramaro, just winding down and seeing family. I’ll close with a picture of a very special couple. Rafa and his new wife on the patio of his father’s home after dinner. It was good to see them and share their happiness. Life is good. 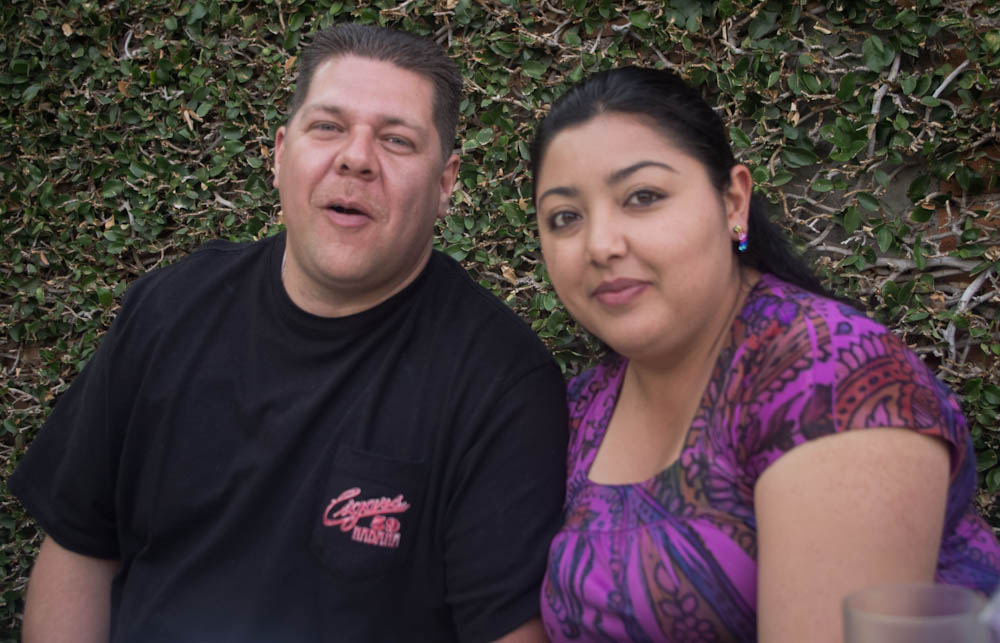