Yesterday, thanks to an invitation from a friend to an organic and sustainable food market (more about that here), I took a walk in Santa Maria de Guido. Santa Maria is a pueblo with a long history that sits above Morelia, overlooking the city and the valley with wonderful vistas. For a long time it remained a small, almost forgotten place on the ridge inhabited by a mix of families who had been there for many generations and a sprinkling of foreigners. In relatively recent times, the brow of the hill has been taken over by the march of fine homes seeking the view from the side of the ridge in the Villas area. In the last few years, the Altozano development and shopping center was started on the Eastern end of the ridge and Santa Maria has been passed by in some ways.

The area reminds me of Cueramaro a little. Cueramaro doesn’t have the colonial era architecture and the adobe homes have mostly disappeared, but the mix of businesses and homes, the small plaza that remains the center of the town, and the busy atmosphere on a Saturday is very much small town México. It is as though the bustling capital of the state, just a few minutes down the hill, doesn’t exist.

So walk with me – we’re not going to see a lot this trip – just a few highlights. I’ll be exploring other parts of Santa Maria another day… 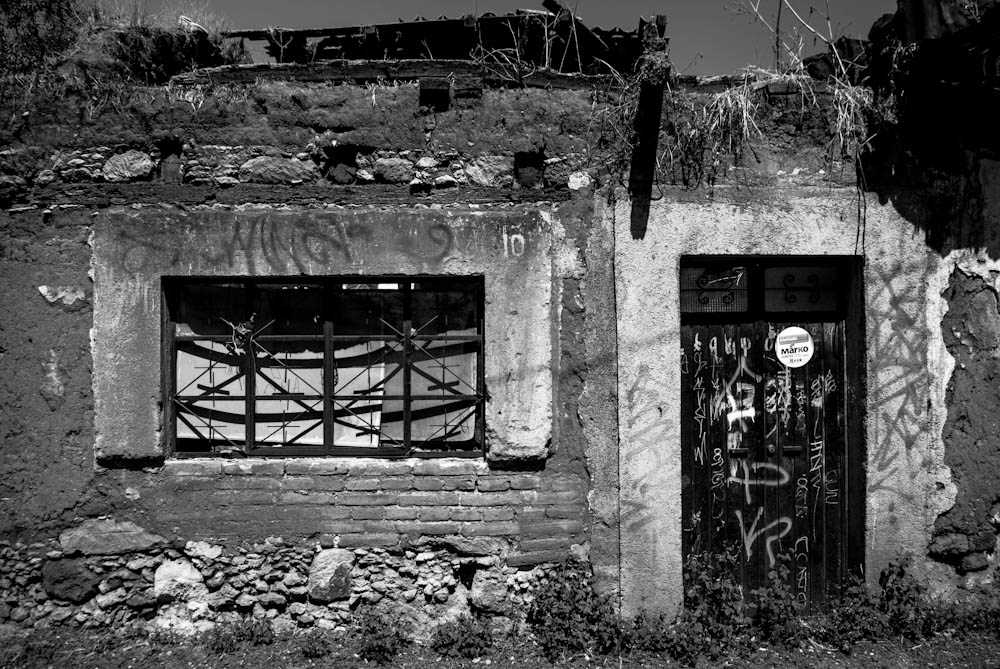 Yes, this is one of the first “black and whites” I’ve done in a long time. It is a very old house, an adobe originally, that shows the patching over many years. It is abandoned now and forlorn. Someday I imagine someone will do what we did in Cueramaro when we built our house – take down everything behind the front wall and build a new house behind it. Finally, the facade will be knocked down and the new house will take its place on the cobblestones. 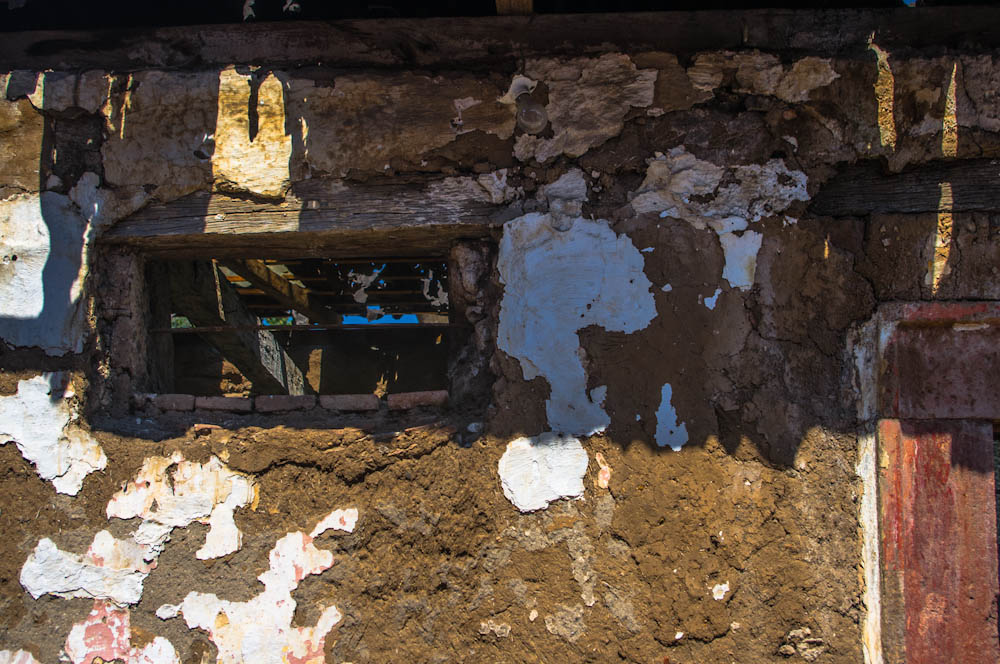 A closeup of a window, a little bit of the interior, the door frame and the adobe wall of the old house above. The plaster and paint of many years is now almost gone. The house is melting back into the ground it came from – fitting I guess. 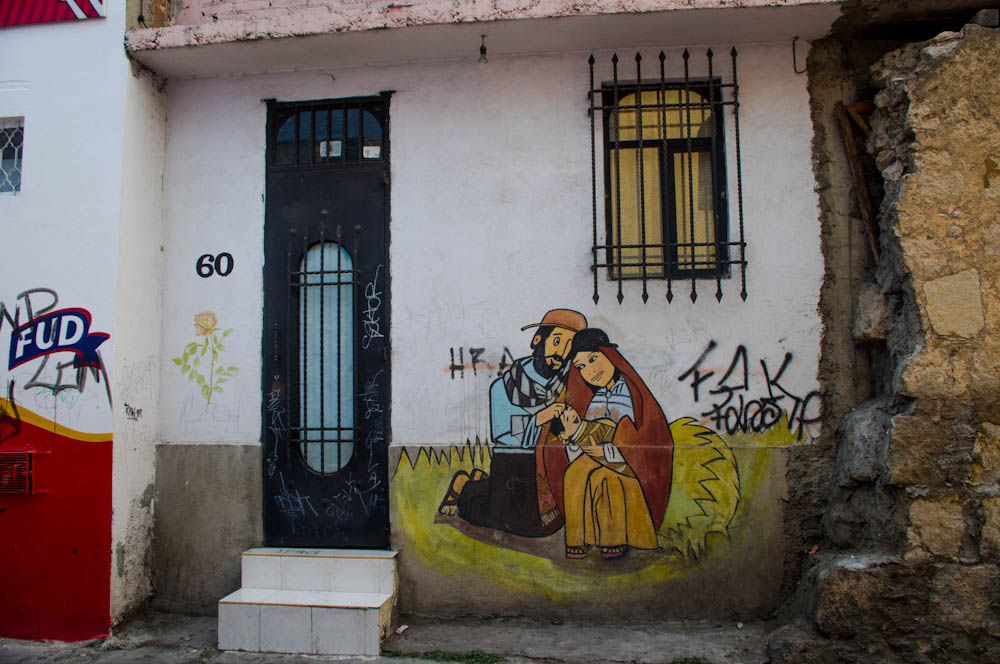 The doorway to a home for elderly nuns – their retirement home – with a mural that honors the family and the care the nuns have offered through their lives. On the left is an advertisement for a well-known brand that sells hot dogs – “FUD” when spoken with a Spanish accent it comes out as “food” – that is emblematic of the mixed messages and branding of many large companies in México. The graffiti and tagging deface everything – advertisement and gentle art alike. It is a collision of many elements – something we get used to. 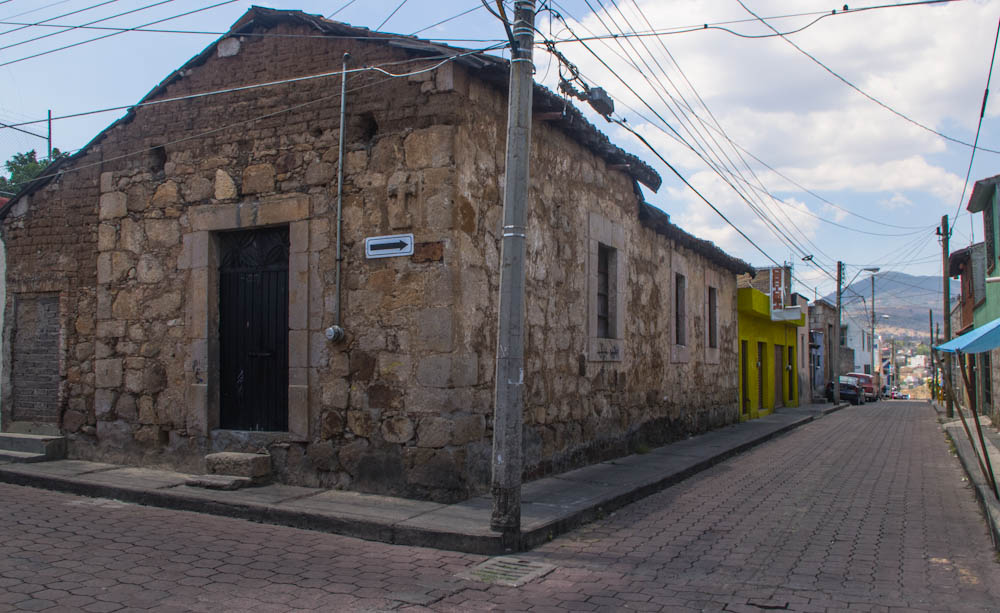 One of the oldest homes in Santa Maria. High windows, the mixture of stone and adobe, and the tile roof all mark this as a very traditional building. Just down the street, the bright yellow store front is a more modern cement building of the type that is gradually replacing these outposts of an earlier time. Morelia’s Centro district was protected some years ago to maintain the colonial buildings and style – at least from the street. Notice the stone cross above the one way arrow. 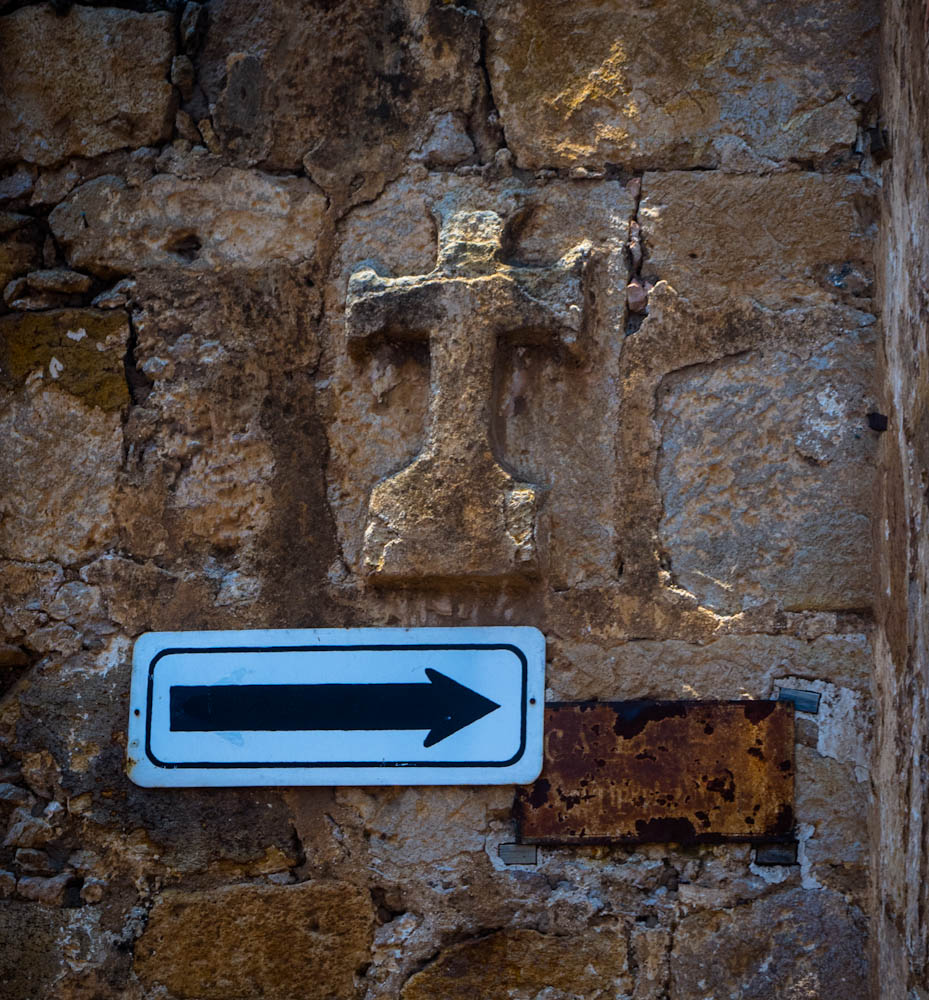 A close-up of the stone cross, one way sign and a street sign so rusted it is an afterthought. Some might see it as some sort of political message. Don’t read anything into it. It is just an interesting play of light and pattern. 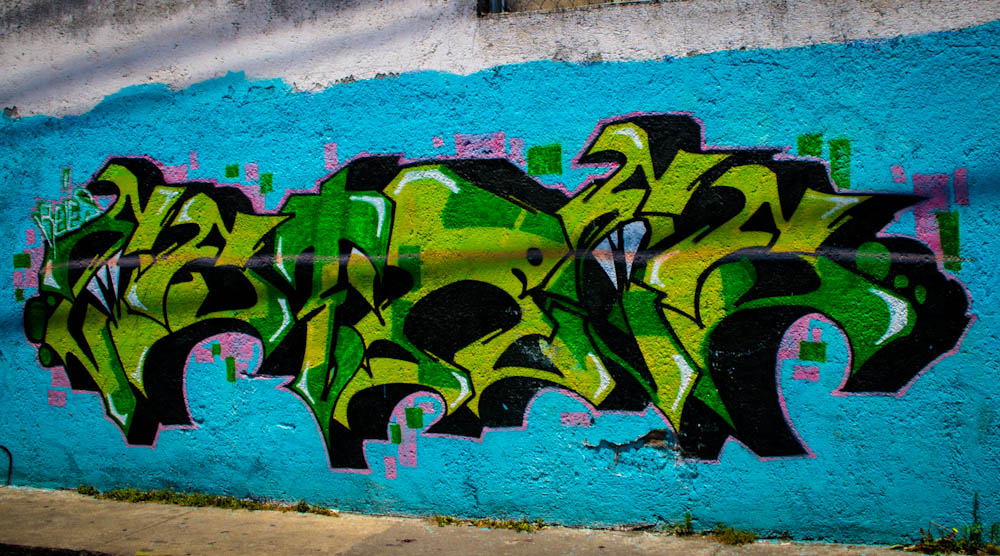 Is it graffiti or street art? I make no judgement. I just see the color and shapes – is there a message here? 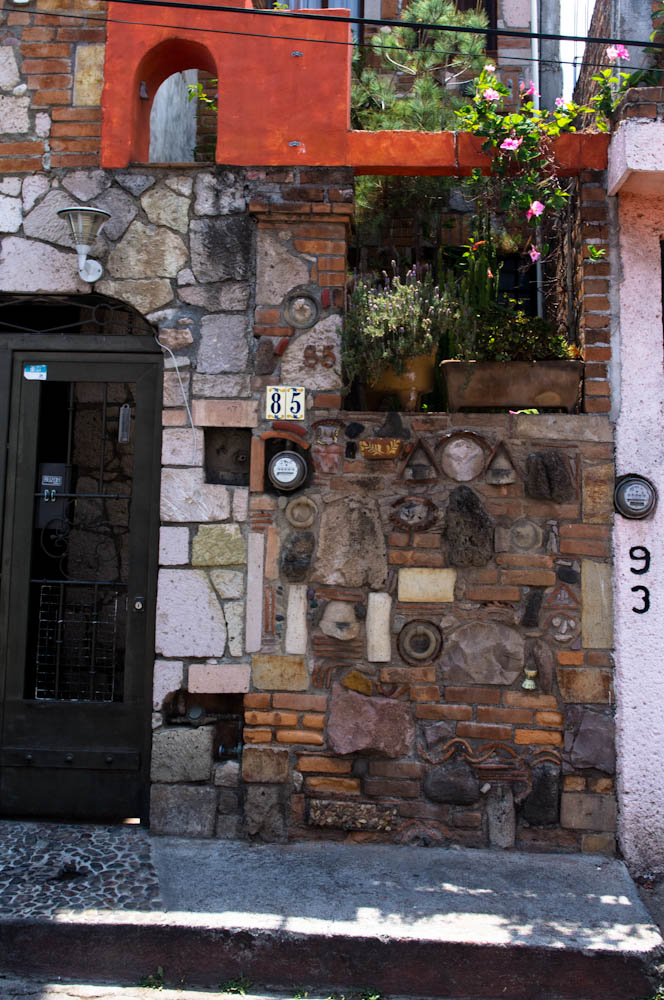 I need strong side-light to show this wall to its best advantage. It is a style developed by the owner of the house that he used in commercial work in several other places over many years. A mixture of mosaic and found art – you don’t see it the first time you pass the house. Little details of everyday life in México…. 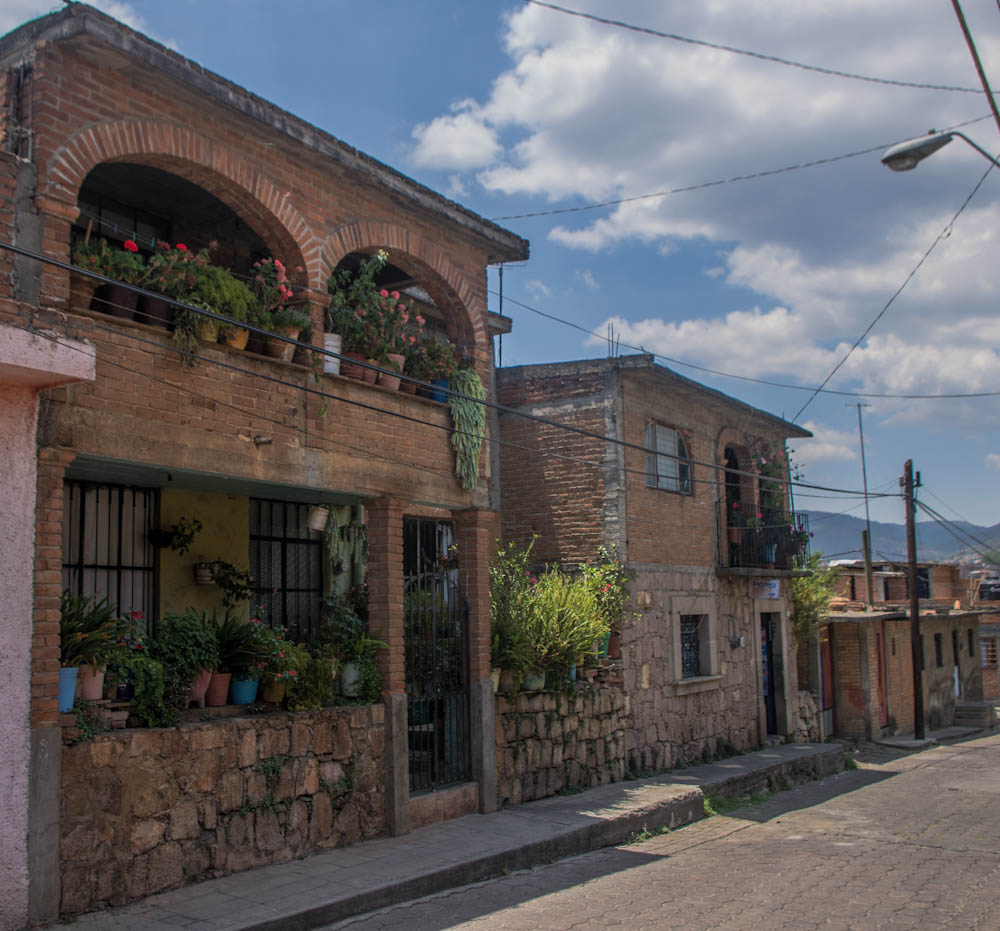 A little ways down the street from the last house is a scene you might see in any pueblo in México. A plain home, made more alive by the addition of many plants and flowers spilling down the stone walls.

Thanks for coming along on this walk – don’t worry – we’ll do it again sometime with other things to see. Maybe next time, I’ll bring the tripod up and do some HDR. Not that we need more color in Santa Maria de Guido…