An Art Walk in Chapultepec

This entry is a catch up from a couple of weeks ago. On the weekends, whenever I can, I like to take walks in different parts of Morelia. I used to live and work in the Chapultepec district and I’ve always loved the area. There are so many nice little restaurants and places to stop when you want to just rest for a while. This particular weekend, there was a small art fair in the park that separates the two sides of Garcia de Leon. One of the bonuses of being on Facebook, and having lots of friends in art, music and food is you find out about all sort of things you would otherwise miss. México has really taken Facebook to heart and just about everyone uses it to keep in contact with their family, friends and to publish events. So my suggestion? If you are in México and you haven’t friended or liked some local organizations or businesses – you are really missing out. 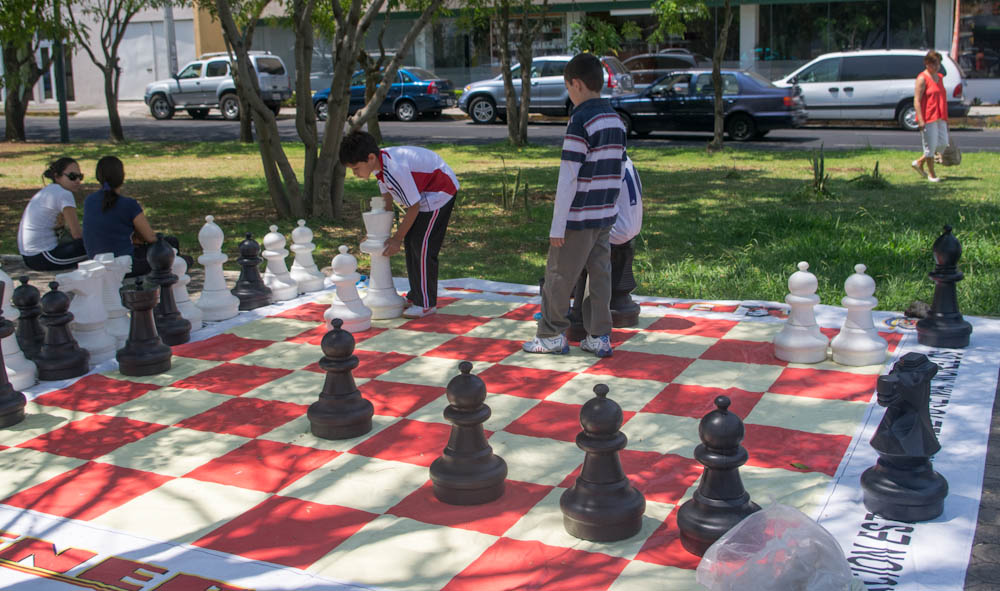 Yes, the kids in Morelia go for chess in big way… At the art fair in Chapultepec, Morelia on Garcia de Leon.

So, knowing about the art fair was all the excuse I needed to walk down to Chapultepec and oh, by the way, stop at a restaurant I hadn’t tried in a while.  The restaurant was a parilla (grill) and quite good, but sorry no photos this time – I was too busy eating! Next time I promise. It was just a block up the street from where the art fair was held, so I know I can find it again. 🙂 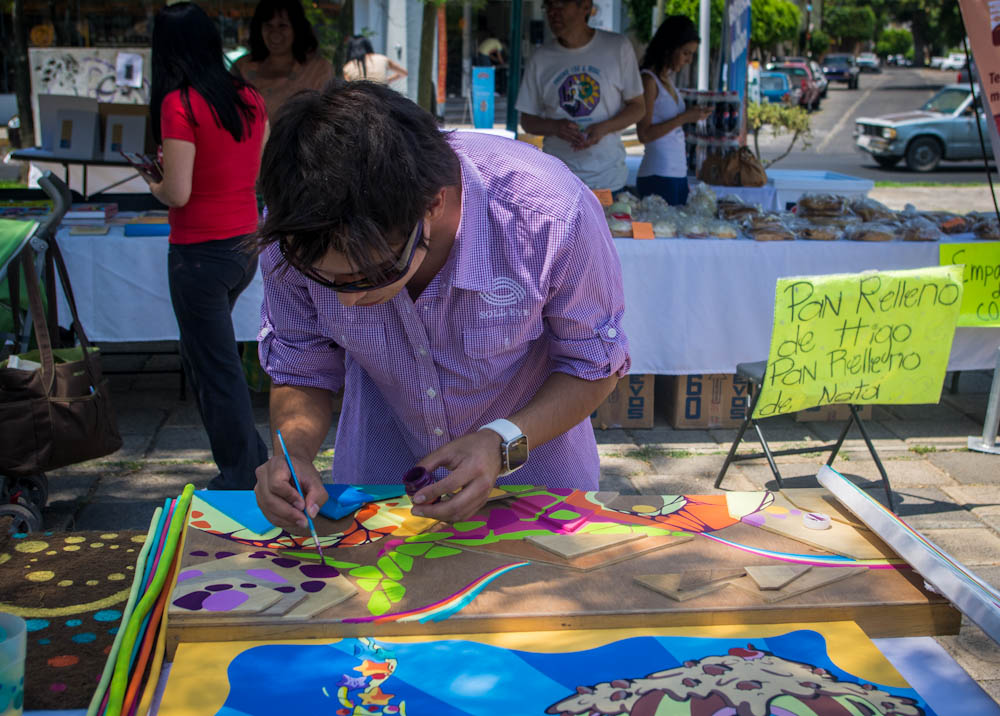 An artist at working on a piece as the fair gets underway. Yes, he is Asian. We have an increasing population coming from Taiwan to México to start businesses and try their hand at opening the Mexican market.

One thing that bothered me recently – the headlines of two articles in the New York Times were sensationalized to grab an US readership. I understand the idea, but I really deplore the tactic especially in these cases. One went on about the displacement of American kids who were forced to return to México when their parents were deported. As much as I am against immigration policy in the US, the writer was far too aggressive in the assessment that children who returned to México after growing up in the US would be left out of both worlds. Yes, life in a pueblo in México is different from life in a big US city. But the same could be said of any child who moves from a large city to a small rural town.  On the other hand, if I didn’t point out that this is a scene on the street in Morelia, you could just as easily believe it is an art fair in a Latino district of LA. My point is – as North Americans – we are more alike than we are different. I deplore what is being done to these children, but it could give them an opportunity to better understand that the border is just a political construct. We share more than we think and the more we share, the more we have.

The other headline that really bothered me is the title of one released today that said, in effect, México’s cities are crime ridden and heavily polluted. That is a very broad brush. The article only mentioned one city and touched on México City. I’m sorry, but the truth is any large city, any place in the world, has problems. Do we have more or less than a similar US city here? Not as far as I can see.  The longer I am here, the more incensed I become at the US media and its sensational treatment of México.  And as a postscript – I add this recent clip from On The Media during their trip to México City. Ok, stepping off my worn and shaky soap box. 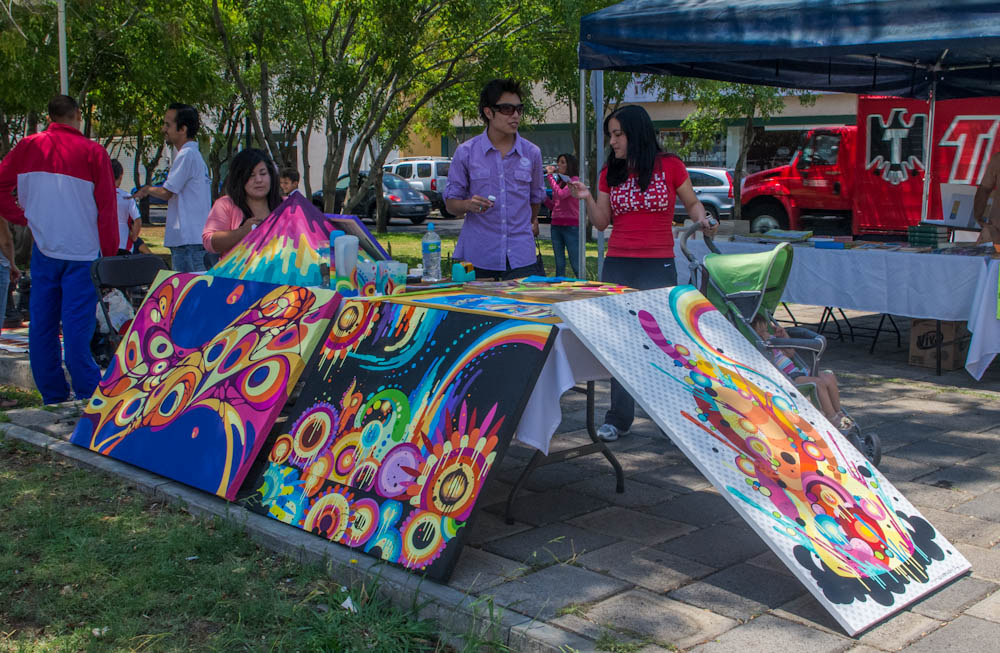 A customer! I have no doubt she is asking for him to match the colors she already has in her home… 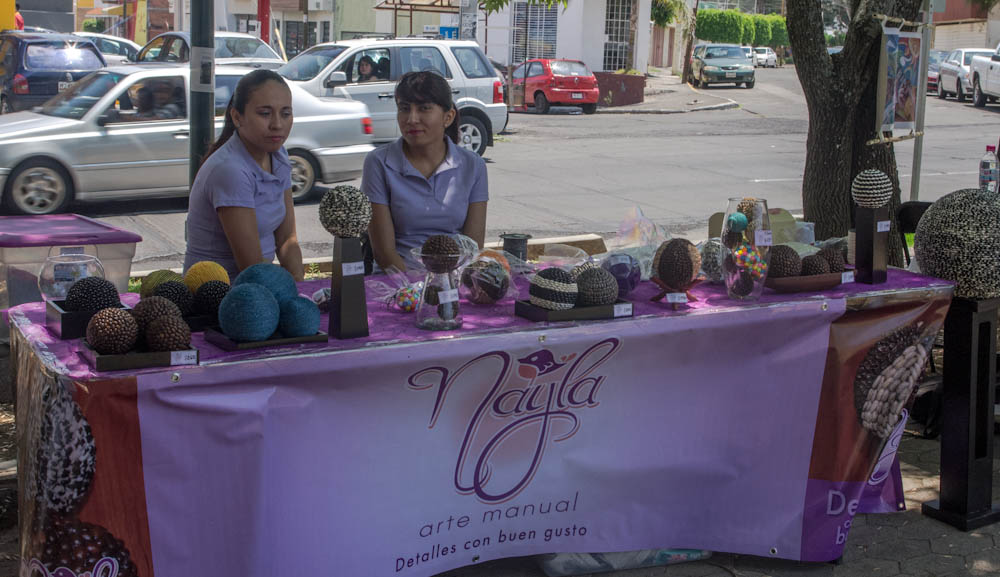 Hand made pieces to adorn any home. The texture comes from seeds, beans and many common things, artfully arranged. 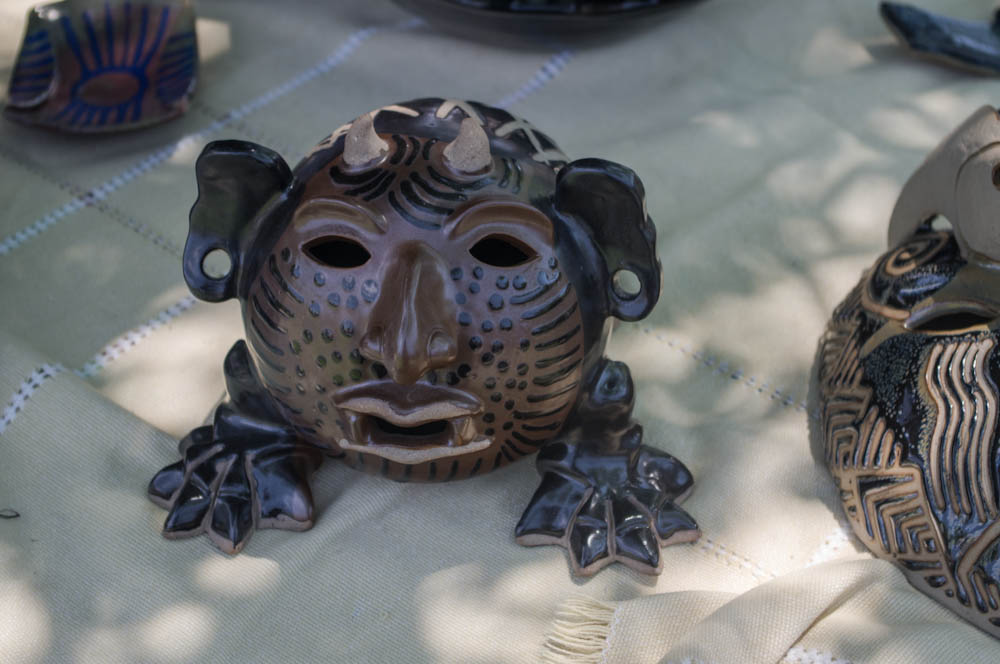 A gargoyle made in the native style – that will keep the bad spirits away! 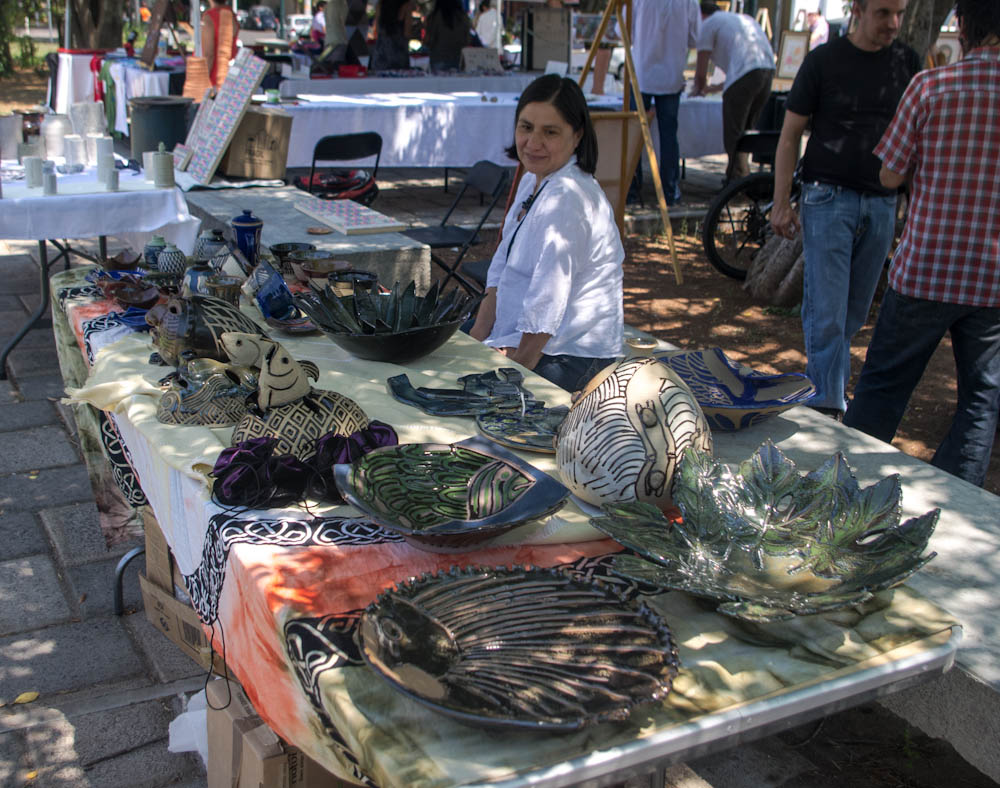 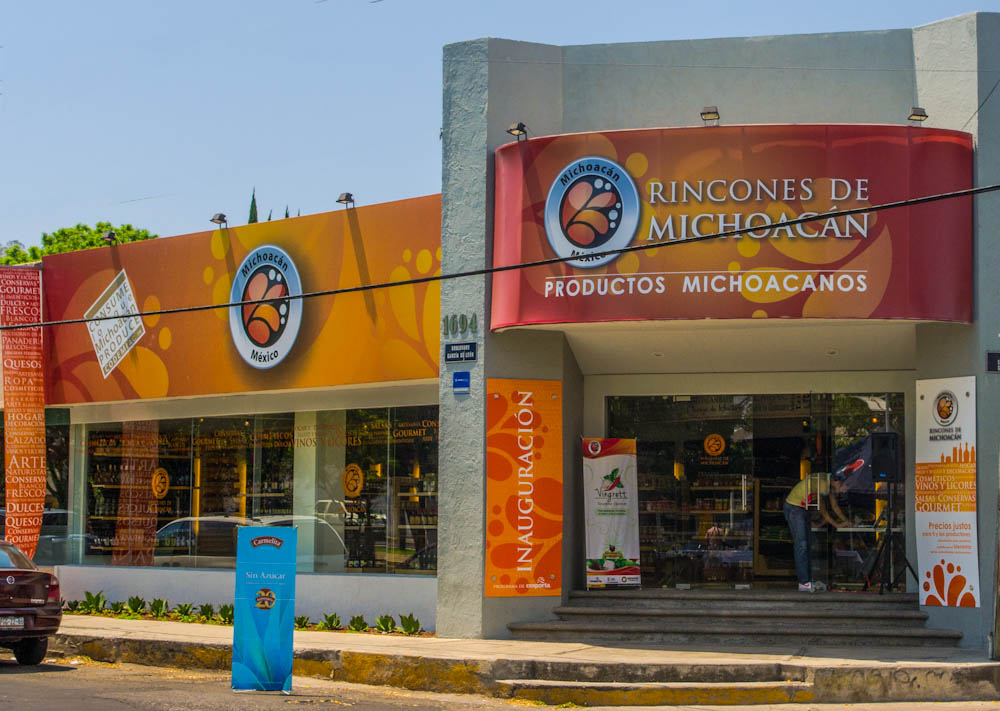 One of my favorite stores, across the street from the art fair. All their products are from Michoacán artisans and that includes some very fine mescal and tequila at prices so much lower than you would see in the US. 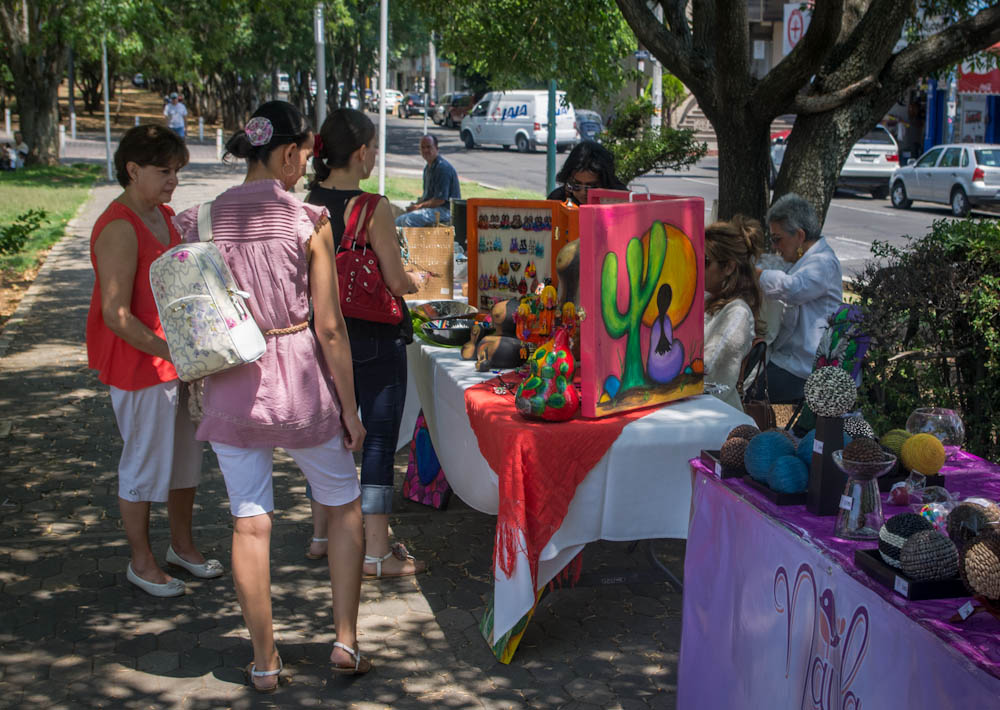 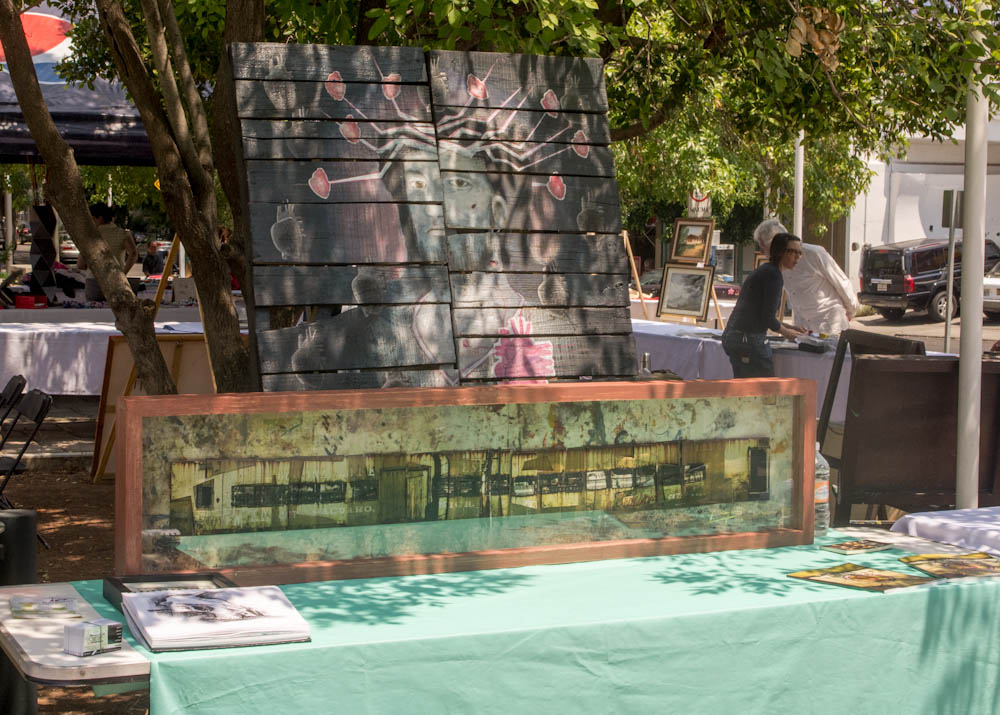 So, we will end this walk with this last piece on wood. Perhaps it is more like what you thought you would see? There is a lot of diversity here. Something for everyone and that is not an exaggeration.