One a Day – 66 Jenny and the Mexicats 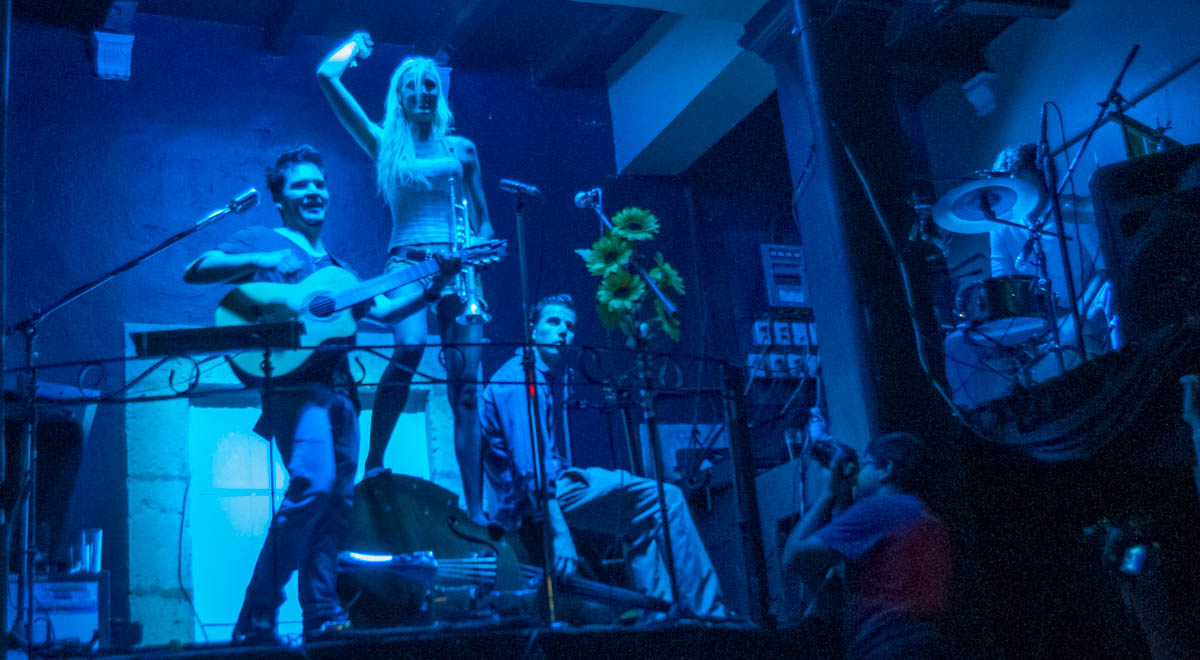 Jenny and the Mexicats at El Barrio – Pantera, Jenny, Icho, and David. David is up in the loft on the right – on drums

If that sounds like a weird way to start this little journal entry , let me just say it was just as much of a surprise to me. It all started with a morning walk along Acueducto in the Las Americas district to capture backlight on bougainvilleas that line the busy roadway. I went back home, posted yesterday’s photo as a tease for a continuation in Centro I planned for later in the day. I like early morning and late afternoon evening walks because the cross light brings out a lot of features it would be hard to capture at other times.

So, I took a combi to Centro and started walking. I knew Roberto Vizcaíno and his son (Vizpercussion) would be doing sound checks at Azuka! in the afternoon. The afternoons are a great time to shoot at Azuka because the light is good enough to get nice views of the group in a casual setting. I took a few nice shots of the guys and details at Azuka and continued my walk, intending to return later that evening to catch them in performance.

I walked around Centro taking a few shots here and there – the light wasn’t quite right yet for the kind of photos I was hoping to capture. I was walking down La Corregiadora and I literally bumped into Carlos (Charlie) Garcia and his wife coming out of El Barrio, their new club in Centro. Charlie asked if I was planning to come to their show that night. I really didn’t have a plan for later in the evening – I was just expecting to capture enough photos to satisfy my artistic urge and head home when it felt right. He pointed to a banner in the doorway of the club advertising Jenny and the Mexicats. I had heard of the group before but never really listened to them. He graciously offered an opportunity to hear them and I said…. YES!

You’re going to need to read the bio on their website to know more about The Mexicats but from my point of view – they are really a great group with a strong future. I’m listening to my personal, signed, copy of their CD as I write this. They’ve worked hard for the fame they are gaining now and it makes me happy to see Mexico embrace artists like this group. I ended the night with over 170 photos from the day that need to be reviewed and edited….

Needless to say, the output from this walk is going to take a while to bring out. Concerts being what they are – not all the photos are worth showing. But I enjoyed it very much and you will see many over the coming months I’m sure. I also met some very nice folks from my web of friends that it seems will bring more opportunities in the future.  And yes, I will get in a walk just for street scenes soon.

Life is a funny animal – don’t you think?