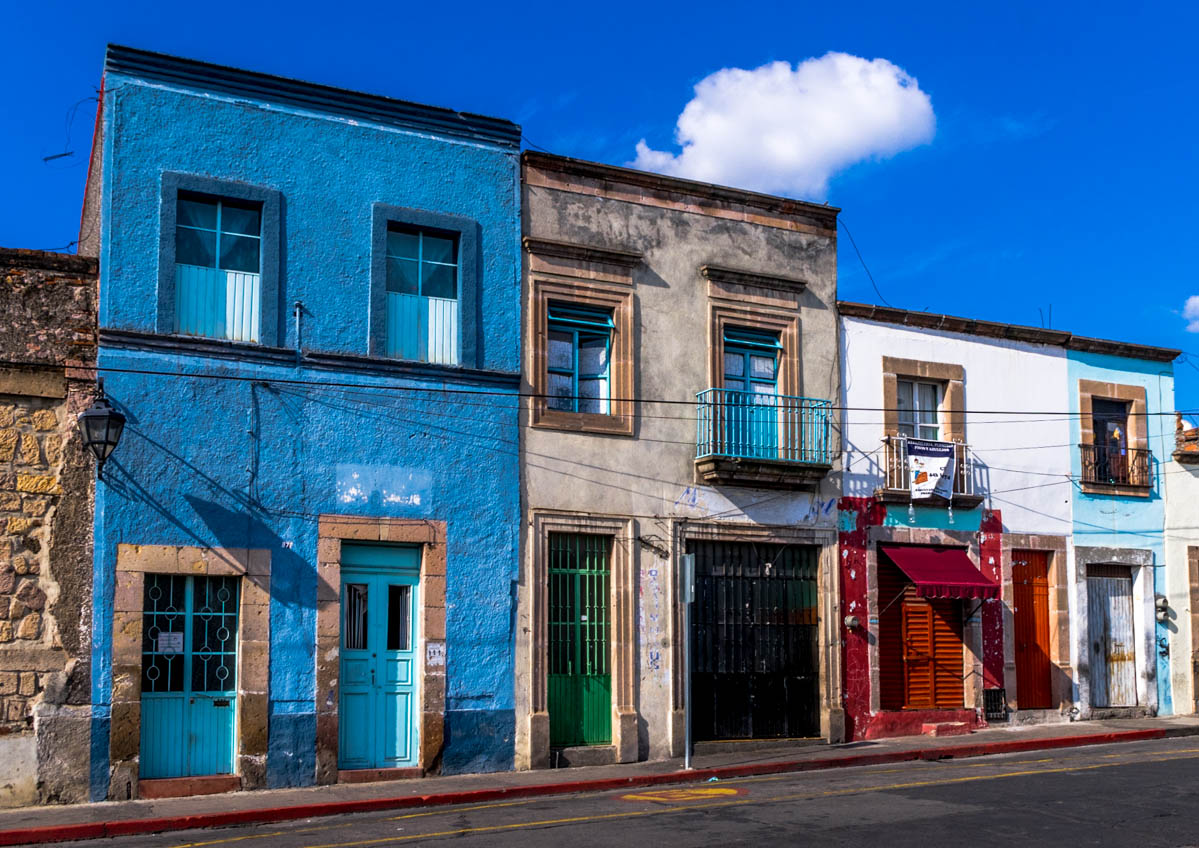 A bucket of blue

I look at a scene like this and I see a story. I’ve never talked to the people behind these doors of many colors, but I’m just sure it is what happened. Yes, it has to be…

Jorge, he is the one with the blue house on the left, his brother is a painter. He was working on a job and at the end, he had a big bucket of blue paint left over. Not one to leave a possible advantage on the table, he offers to use it to paint Jorge’s house. After all, it has been years since the last time it was painted and Jorge’s wife has been bothering him to get it done for as long as anyone can remember.  He doesn’t mention that the bucket of blue is a left over. Why lessen the value of his gift?

So, one fine day, Jorge’s brother comes over with ladders and they start painting. That bucket of blue is dark, so they can thin it back with some white and get more than one shade out of it plus more overage. As they are working, Toni’s wife Maria – that’s the couple in the house next door with the green door – comes over and compliments them on a fine choice of color.  She has a small jar in her hand. Jorge is a lot like his brother, so of course he doesn’t mention that the color wasn’t his choice, instead he smiles broadly and thanks Maria for her compliment. He notices the jar in her hand and asks her – does she want to borrow some sugar?

Maria laughs and says no, but with all that fine blue paint, certainly more than they need for the front of the house, would her kind neighbor mind letting her take enough to brighten up the window trim and railing upstairs? Jorge pauses and then says yes. She dips her jar into the bucket of light blue. She will soon have her son hanging out the window to bring a little brightness to the front of their home.

While this is going on, Ricardo, that’s the fellow in the house with the red door, steps out on his balcony just as Maria heads back with her jar of blue. He smiles and yells good morning to Jorge. In less than a minute he is downstairs standing next to the bucket of light blue that Maria just used to fill her jar. Would Jorge mind if he borrowed a brush for a minute? He has been wanting to cover the name of the former shop that is above his door for some time. Just a brush load is all it will take. Jorge doesn’t mind, so Ricardo dips a brush in the blue, grabs an empty bucket and walks back to his house to paint over that name while standing on top of the upside down bucket.

About that time, Lupe – the widow who lives in the little house on the right – comes out with her shopping bag. She comes over to inspect the work Jorge and his brother are doing on his house and remarks what a fine thing it is for Jorge to paint his house and brighten their little street. She would so much like to be able to paint her little place, but you know, it is hard for a widow to afford such luxuries. She sighs.

Jorge rolls his eyes. He knows what is coming. If he doesn’t offer to help her out he will never hear the end of it. And after all, her house isn’t that big. But he looks at the buckets of blue – there might not be enough. His brother, seeing the look on Jorge’s face as he stammers toward an answer for Lupe, offers to cut the blue a little more with white to make it stretch. They will come down after they finish Jorge’s house and get it done.

Lupe smiles, thanks them and says she would be glad to pick up a few things for them as she does her shopping. Would a few beers be welcome as the sun heats up the wall? Of course…

So that is my story of how this scene came to be. I’m sure it’s true. Aren’t you?