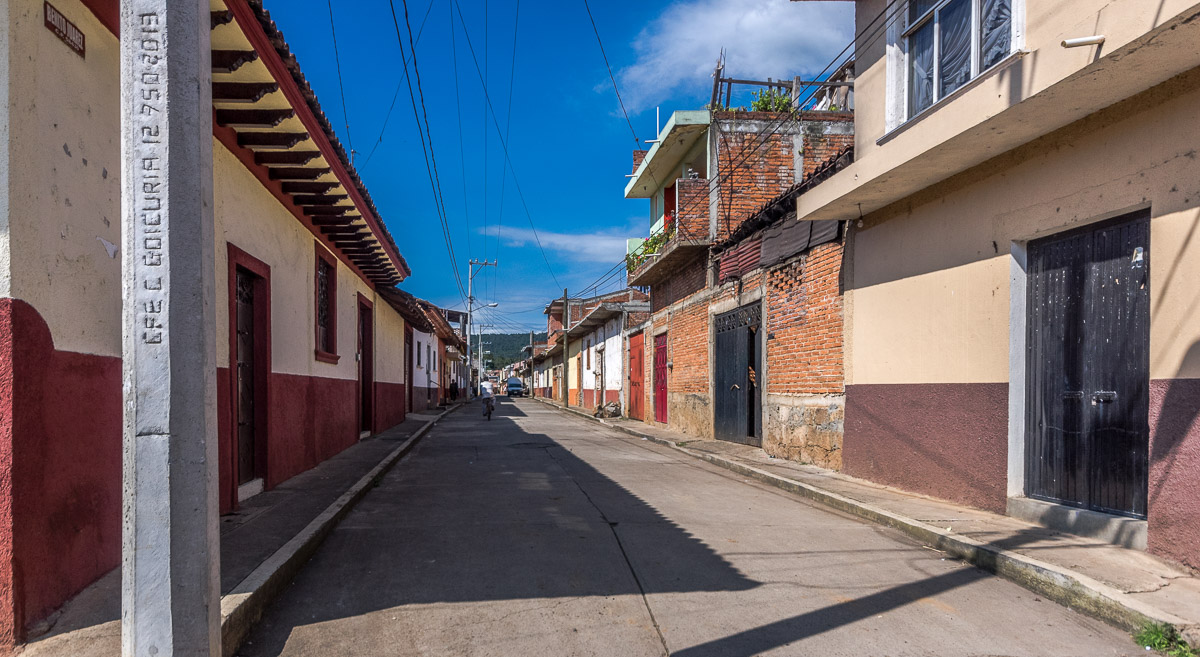 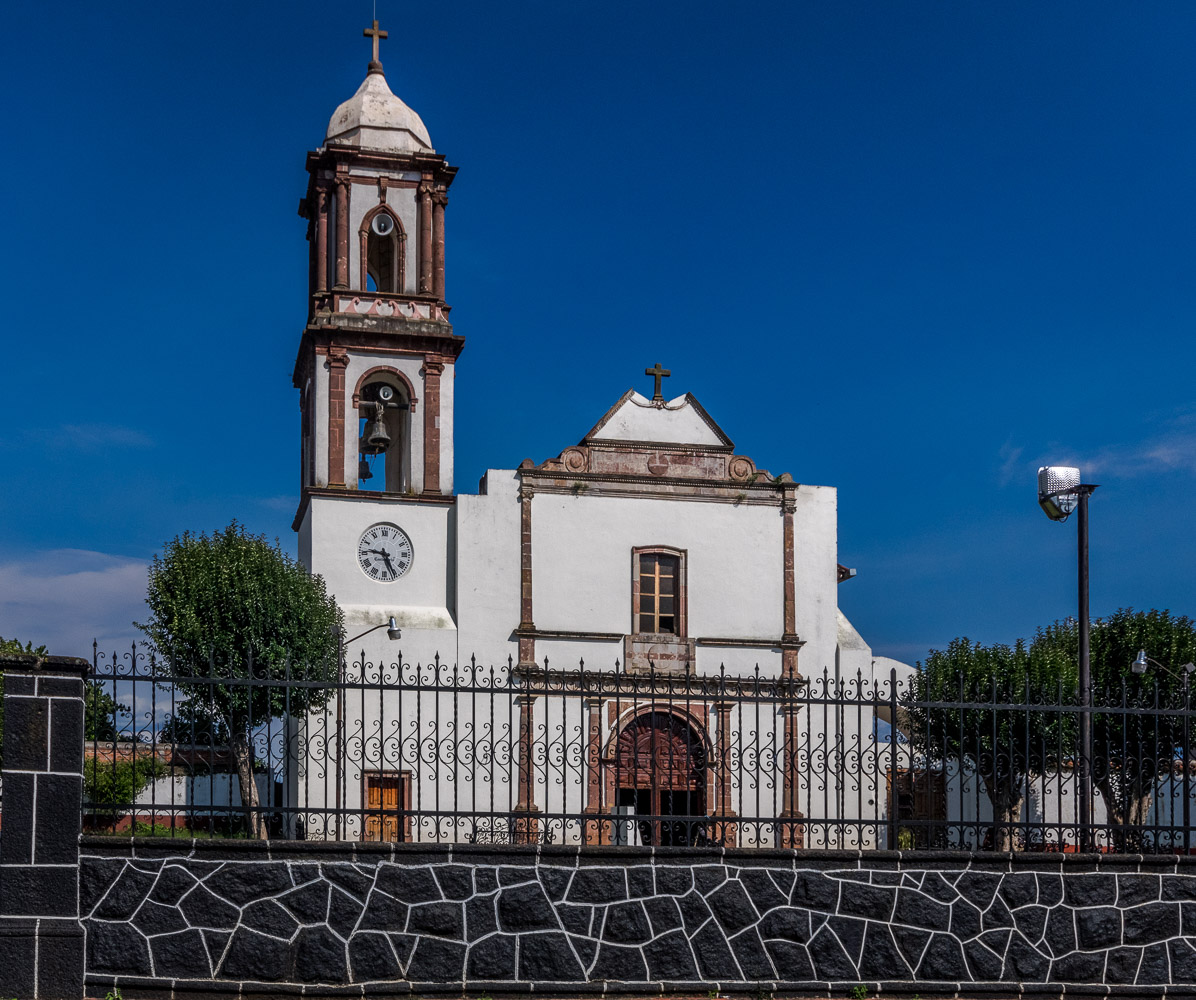 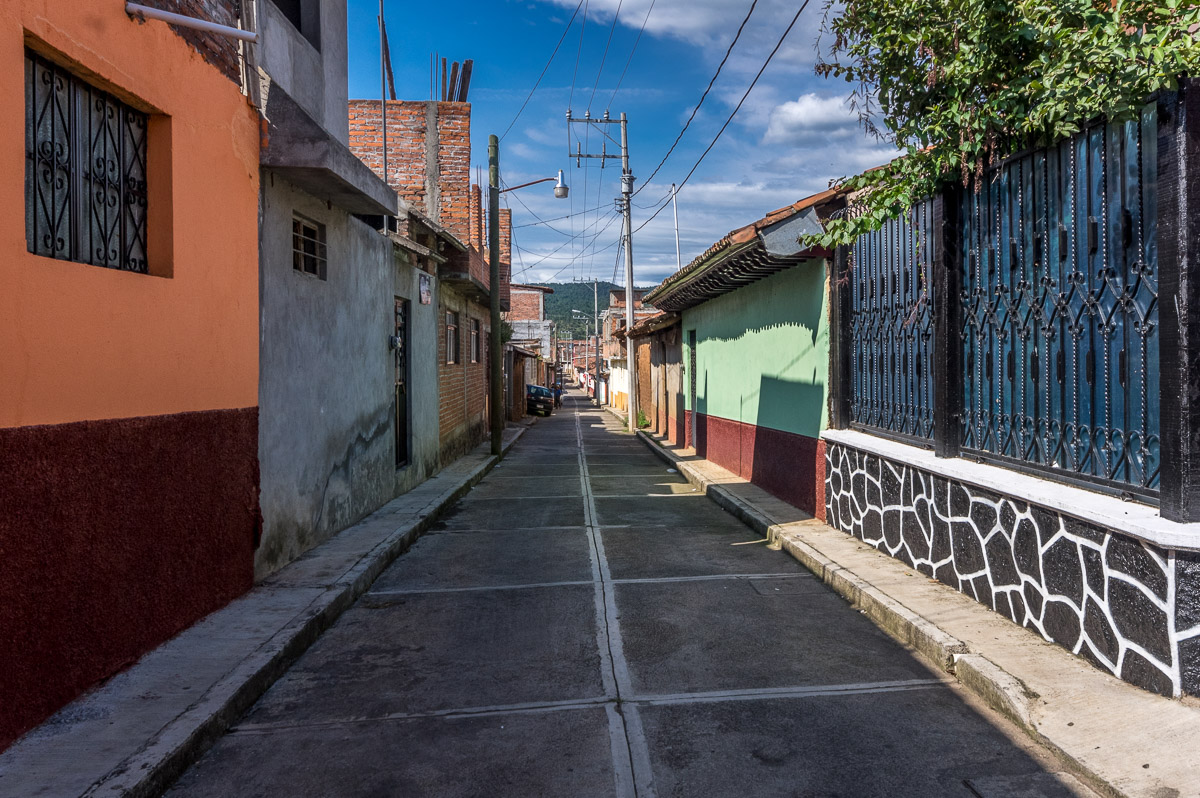 Down the Straight and Narrow. No cars, no graffiti, peaceful. 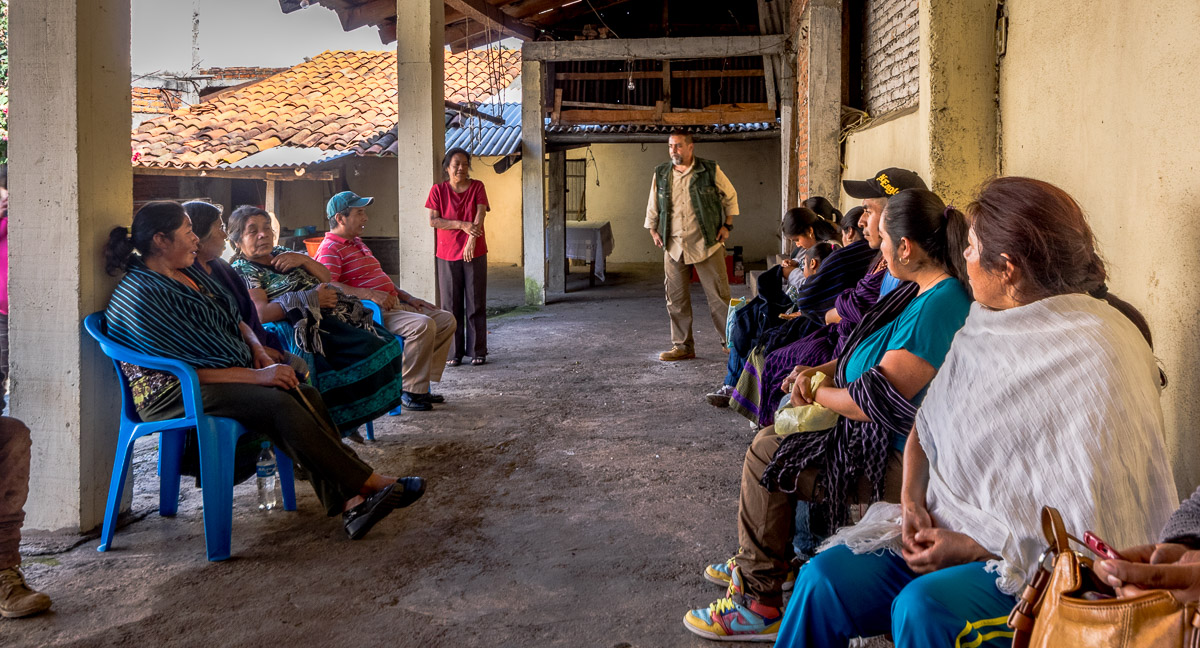 Discussing the program and projects 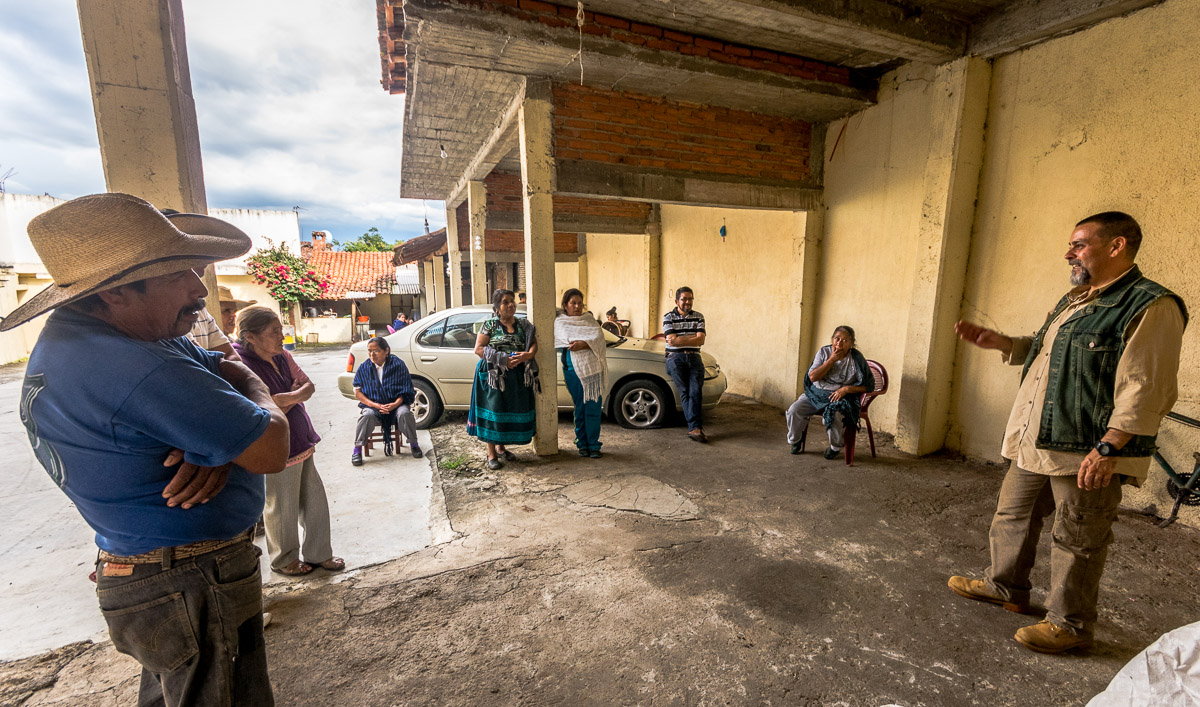 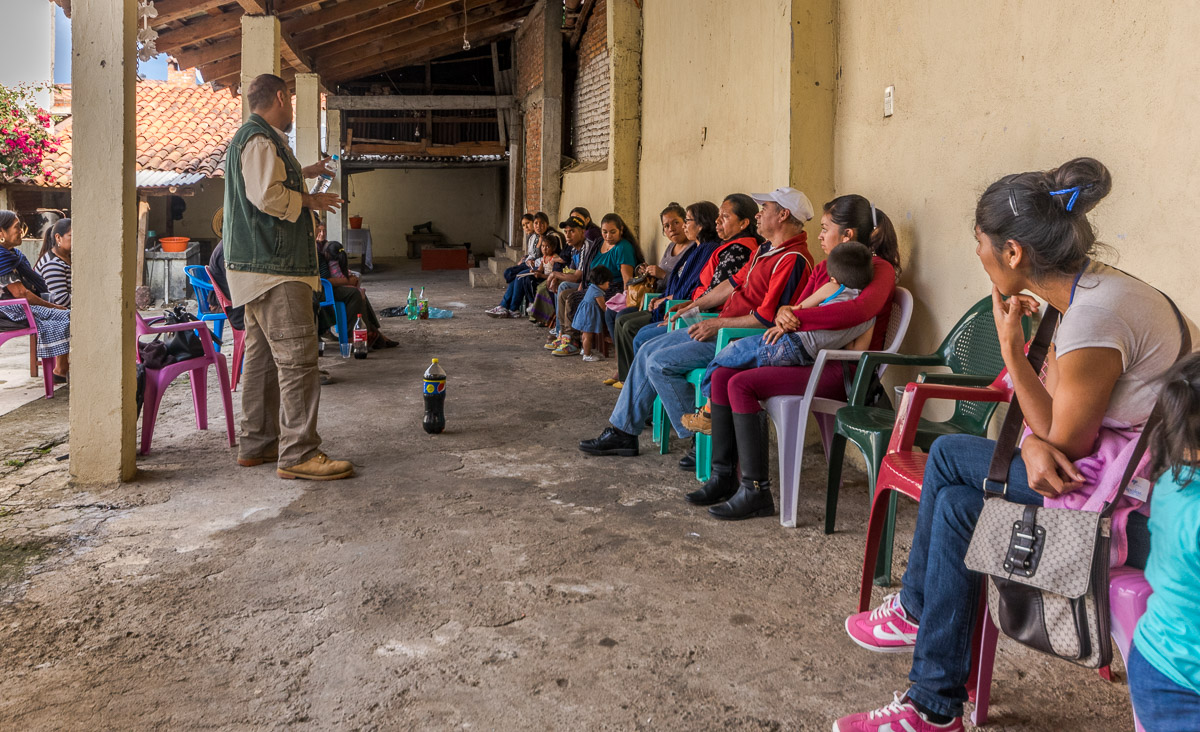 Closing and plans for next time 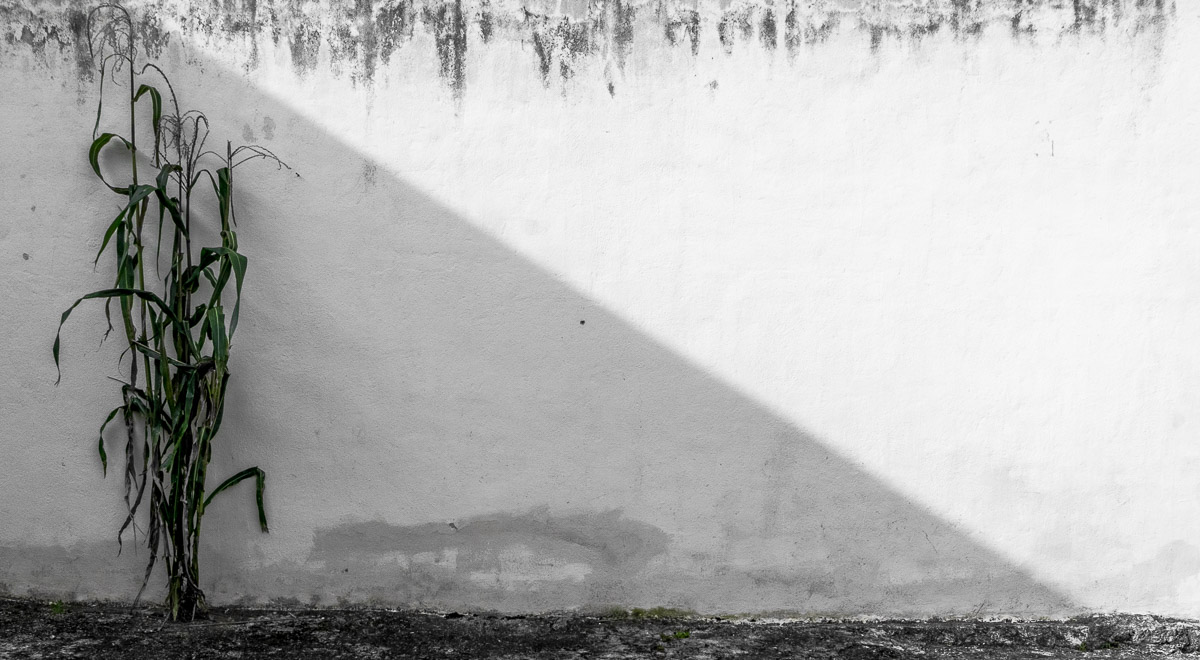 Geranium collection in the loft 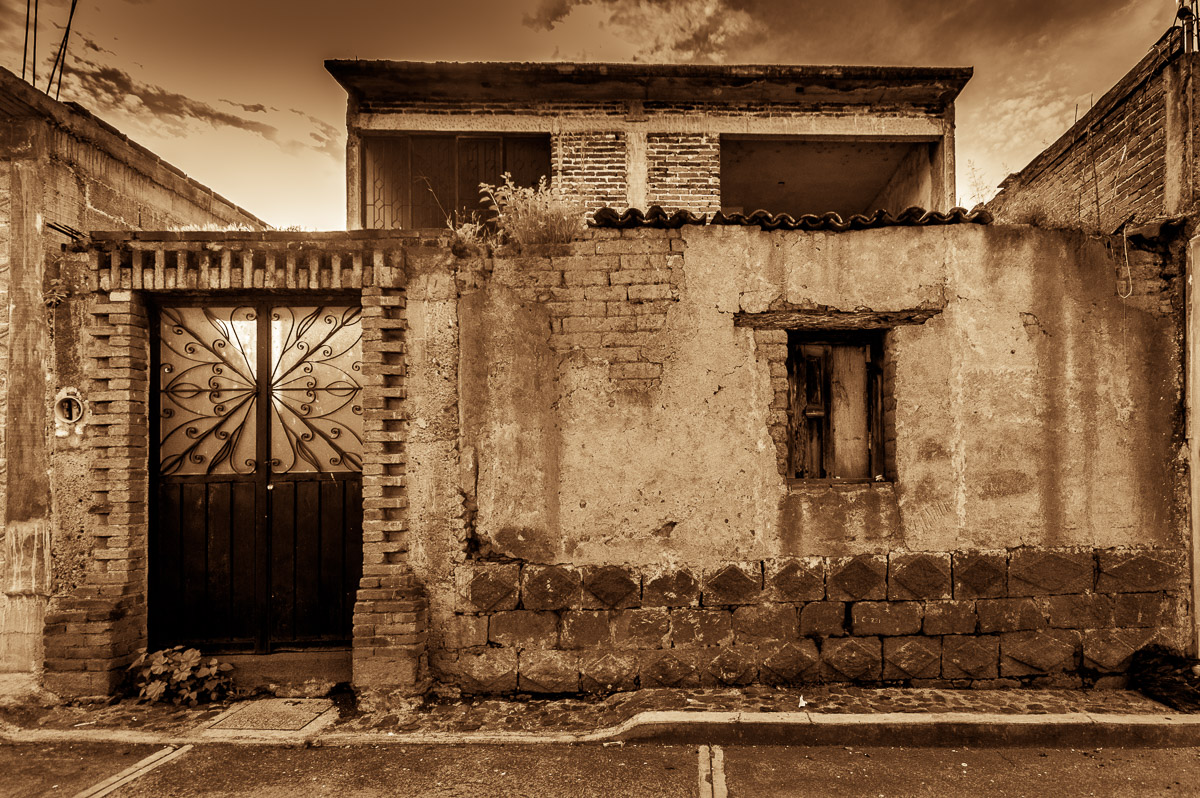 Abandoned? In Transition? Hard to Say. 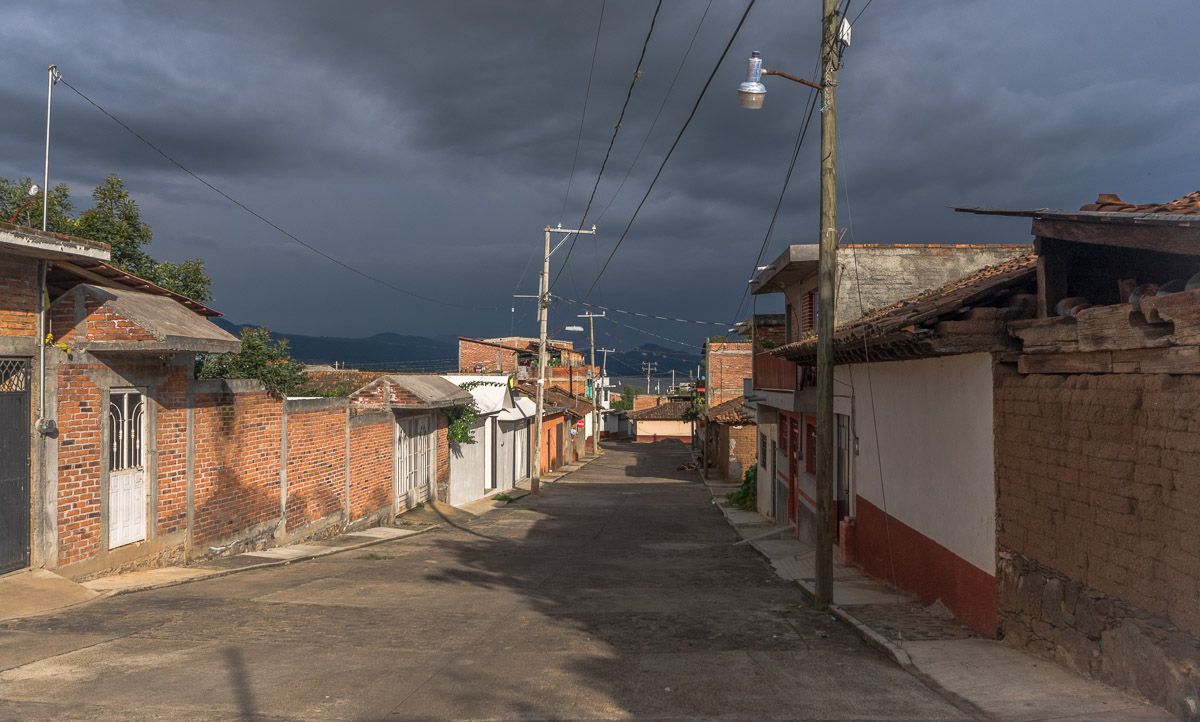 Storm coming across the lake 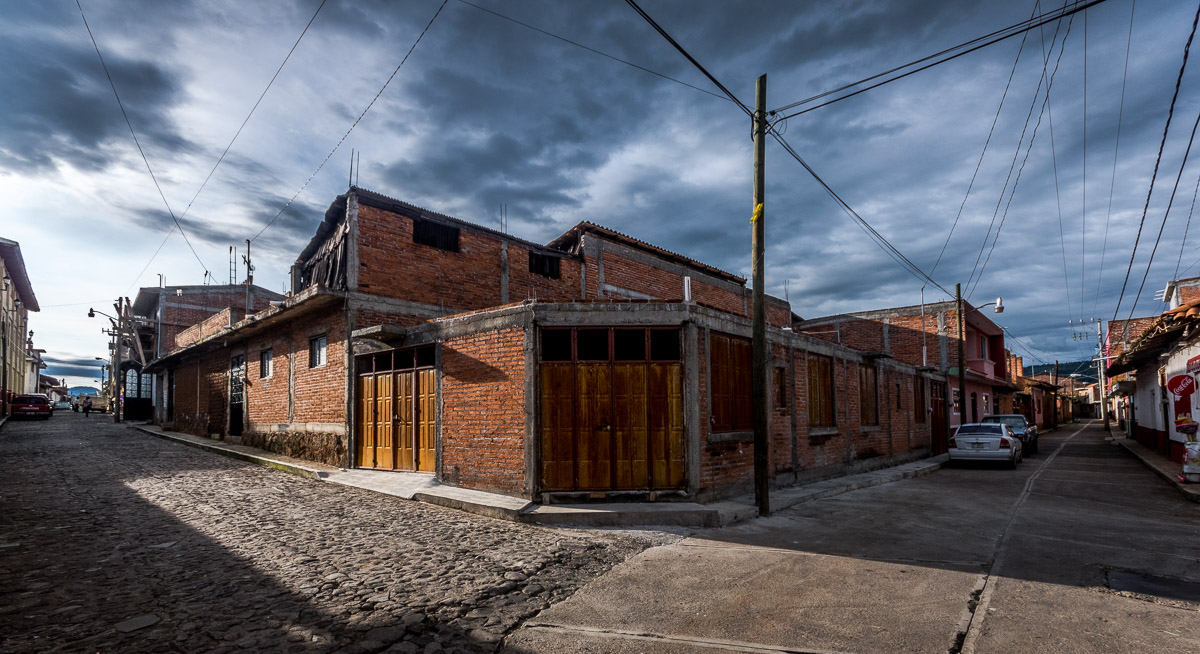 Upgrade on the Corner 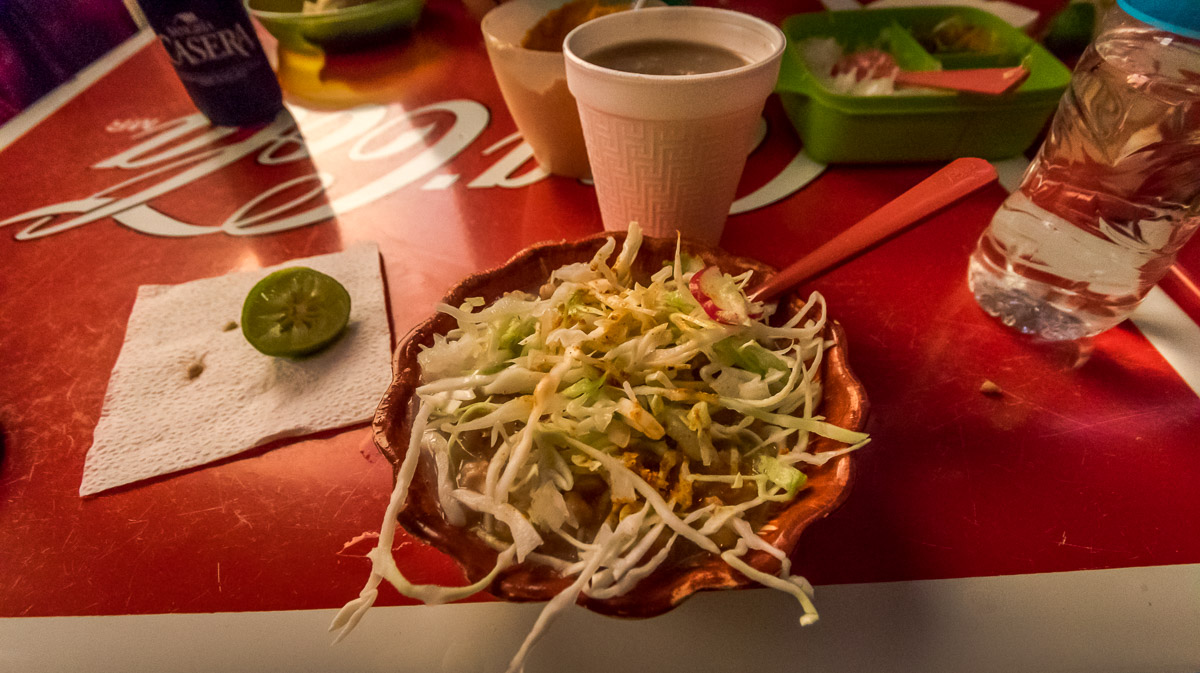 Finishing the day and the trip. A bowl of pozole with made with local corn.

This is the third set of three (1st post and 2nd post at these links) from a trip I took last week with Erick Legaria around Lago de Pátzcuaro. This series was in the small town of San Jerónimo Purenchécuaro on the shores of the lake with a final shot as we completed the trip around the lake in the city of Quiroga, with some great pozole in the central square.

San Jerónimo is a beautiful little town, as peaceful and quiet as any I have ever seen. To get there, we came back down the mountains from La Tenencia Làzaro Càrdenas to Erongarícuaro and then caught a combi that circles the lake. Seeing the lake from the side opposite Pátzcuaro was a beautiful trip and I saw many places I would love to visit again on a photo trip. At this time of the year, the valley around the lake is green, the flowers are coming out, and the temperatures are mild. There isn’t much to complain about.

This was Erick’s introductory visit to the people in San Jerónimo, so it was about introducing the program, what it could offer the residents of this and surrounding towns, and what would be expected of participants. It was late in the afternoon and a storm was approaching, but there were several people who were quite interested, so it was a good visit.

A couple of words about the “atmosphere” photos in this post. “Struggle” isn’t just a photo of a set of corn stalks in a parking lot. Areas like this depend on native corn as a part of their life and culture. It feeds their families and their animals. Fiestas are planned around the planting and harvesting. It is eaten fresh, dried and stored for processing into tortillas and many local foods that are made from the masa. Unlike the high sugar, fast-growing transgenic corn that is designed for mechanical harvesting and proprietary chemical fertilizers and weedkillers, the native corn varieties have been selected over centuries for their benefits by a people who depended on them long before the Europeans appeared on the continent. They still do in many ways. Monsanto and others have been trying to make local farmers switch to their modified seed and program and some people have. The results have not been beneficial for the many small farmers in this area. The genes are starting to show up in local corn. They don’t have and can’t afford the kind of equipment or chemicals that these varieties are programed for. The corn itself does not adapt well to the local foods or traditions. And perhaps worse of all – none of us can say that one day those treasured native varieties of corn won’t have benefits that we will all need some day. There simply is no one answer that fits everyone and we are losing heritage corn bit by bit.

“Geranium collection” is an arrangement of flowers that we see all over Mexico. Geraniums are among the most popular flowers for color in pots around homes because they grow and flower over a long season in this climate. “Abandoned…” is a phenonium that is easy to find in pueblos around Mexico. As people leave their birthplace for more opportunities, they often buy a old home or an empty plot of land and begin to make a home where they can return to visit on holidays or in their retirement. The truth is however, they often don’t. They make new ties in their new homes, they lose contact with their family and friends – life moves on. So in little towns like this all over Mexico, there are these empty, half-built dreams. It is sad for both the people and the communities where the impact is felt.

That bowl of pozole was a point of conversation for all of us – because it was very well made with all the right condiments and it was made with the local corn, instead of canned hominy. The difference was very pronounced and wonderful. Rose-hued kernels of fresh local corn with shredded chicken – so flavorful and easy to fall in love with.

So this ends the photos from this trip. I hope you enjoyed it. My thanks to Erick and his crew in Erongarícuaro. I enjoyed meeting them and having the chance to tag along with them and I hope we will be able to do it again soon!