I had the Friday before New Years 2012 off and I was planning to be in Morelia, so I decided to take my first serious location walk the (as yet unnamed) novel I am working on. I have a plot outline I am working from, but since this novel takes place where I live, there is no need to create a completely fictional set of scenes. I can work from real locations and this makes it much easier to keep the details consistent while I move the plot forward.

This is a crime novel set in Morelia. I have struggled with the idea of writing something in the crime genre here in Michoacán. Morelia and Michoacán have been stereotyped with an image of being very dangerous because of the drug trade in México and several indents that have happened over the years. As a resident of Morelia, I can honestly say the image is overblown by the media, but there are some grains of truth. México is dealing with a serious crime problem because of many factors including the criminal organizations that move drugs through this country to the US. I decided that if I wrote a story that ignored the problem as though it didn’t exist, no matter how well it was written, it would be taken as lies. Instead, I want this story to face the problem head-on and explore some of the deeper issues that fuel it.

I should also say that regardless of what you many have heard, México as a whole remains a reasonably safe place to live, if you avoid the Northern border areas. Compared to cities larger and smaller in the US and other countries, the violent crime rate remains low, even with the problems El Narco brings. Thanks to tactics of Latin American guerrilla wars and the leaders trained at the infamous University of the Americas by the CIA, murders by criminal organizations are intended to send a message and meant to grab headlines and attention. But let’s move on to the story I’m writing…

To make it easier to follow — here is the plot outline for the first two chapters:

Chapter One – Business as Usual

In the third chapter, we will see the introduction of the main character as he does his morning walk up Acueducto, past the jail and to the scene of the tamale seller’s death moments later.

Although everything about this story is fictional, there are a few plot points that are loosely based on actual events. This is the start of the novel, the events and the business as usual feeling is important. It is held up to the point of the tamale vendor’s death, so there is a creeping horror to these two chapters.  I have left out some pictures, particularly the locations that I am using for the home of the mark and the tamale vendor. They are of no interest to anyone but me and I don’t want anyone to think this is a true story or based on anything real. When I made up this outline, I had never been to the two locations I imagined. The point of this walk was to see if the scenes would work in real life.

The eery thing is — everything was there — just as I imagined it. What the walk did was put flesh on the bones… Sometimes it makes me wonder if we live in the world our mind creates.

Here then are some of the pictures and notes from the walk. Watch this blog for more as I continue to build my story. 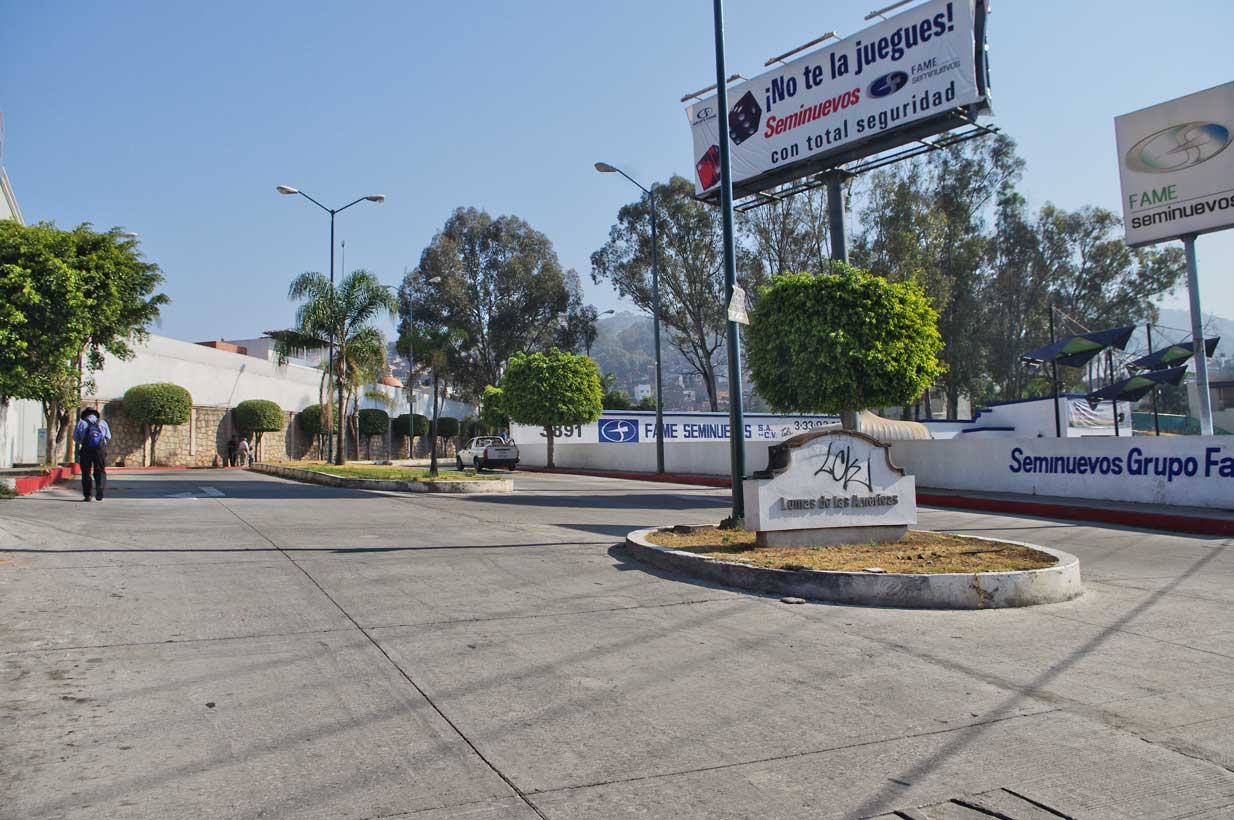 The street the killer takes after making his u-turn to make the long drive toward where he will meet his lookout. 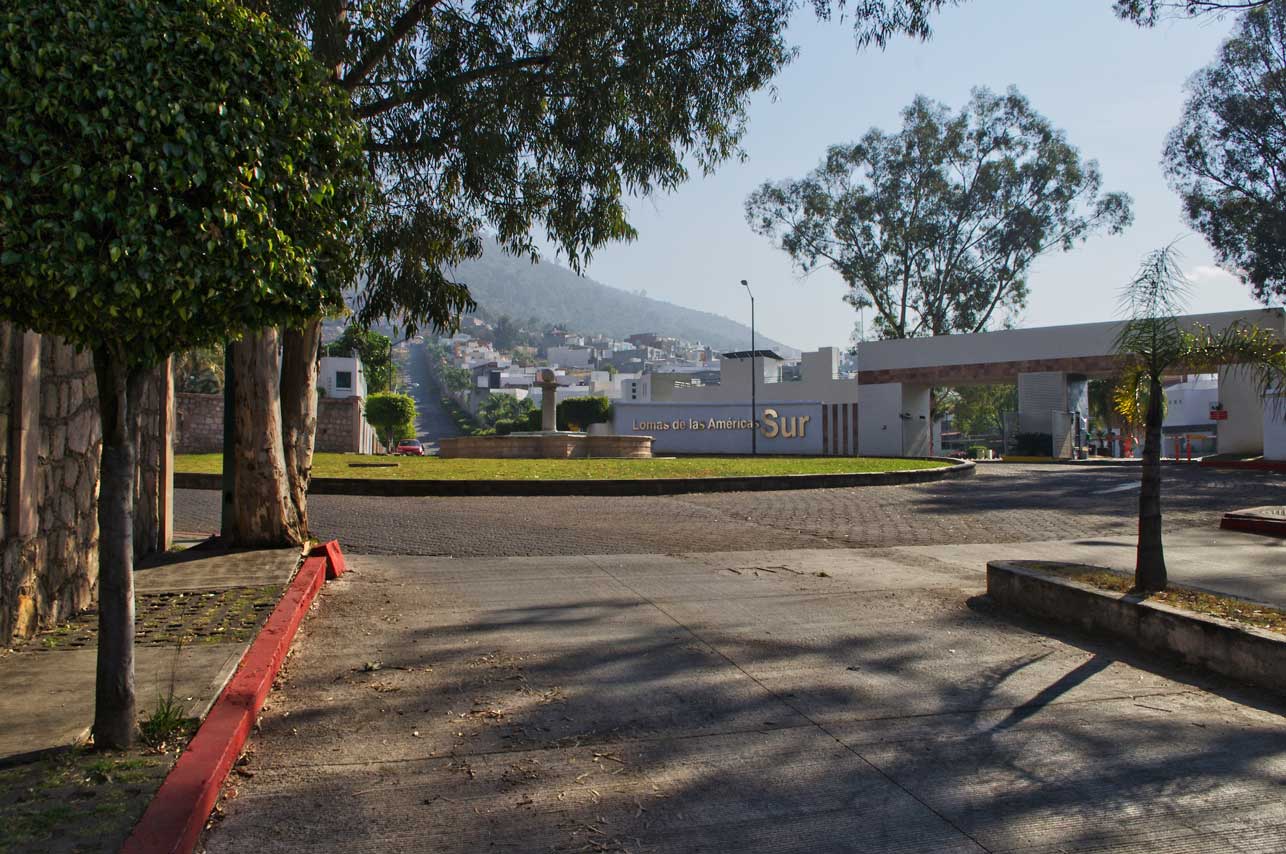 We will follow the driver around this circle and up the long road behind it to where he will meet his lookout. 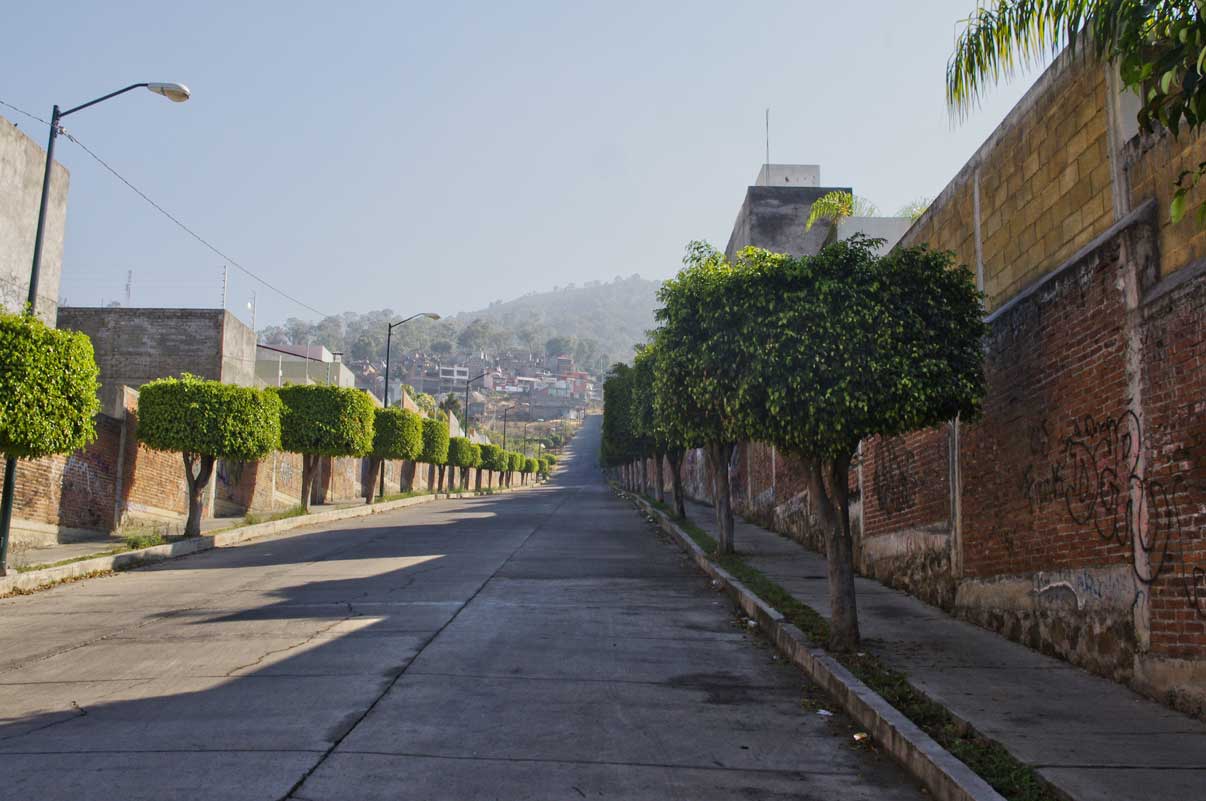 This long road, with the walls of the two private housing developments on each side, is at a steep angle. It was a serious walk up the hill. I met several people during my walk who were walking up from stores below to their houses higher on the hill. It is a bit of a bleak feeling, walking up this hill and between these walls. 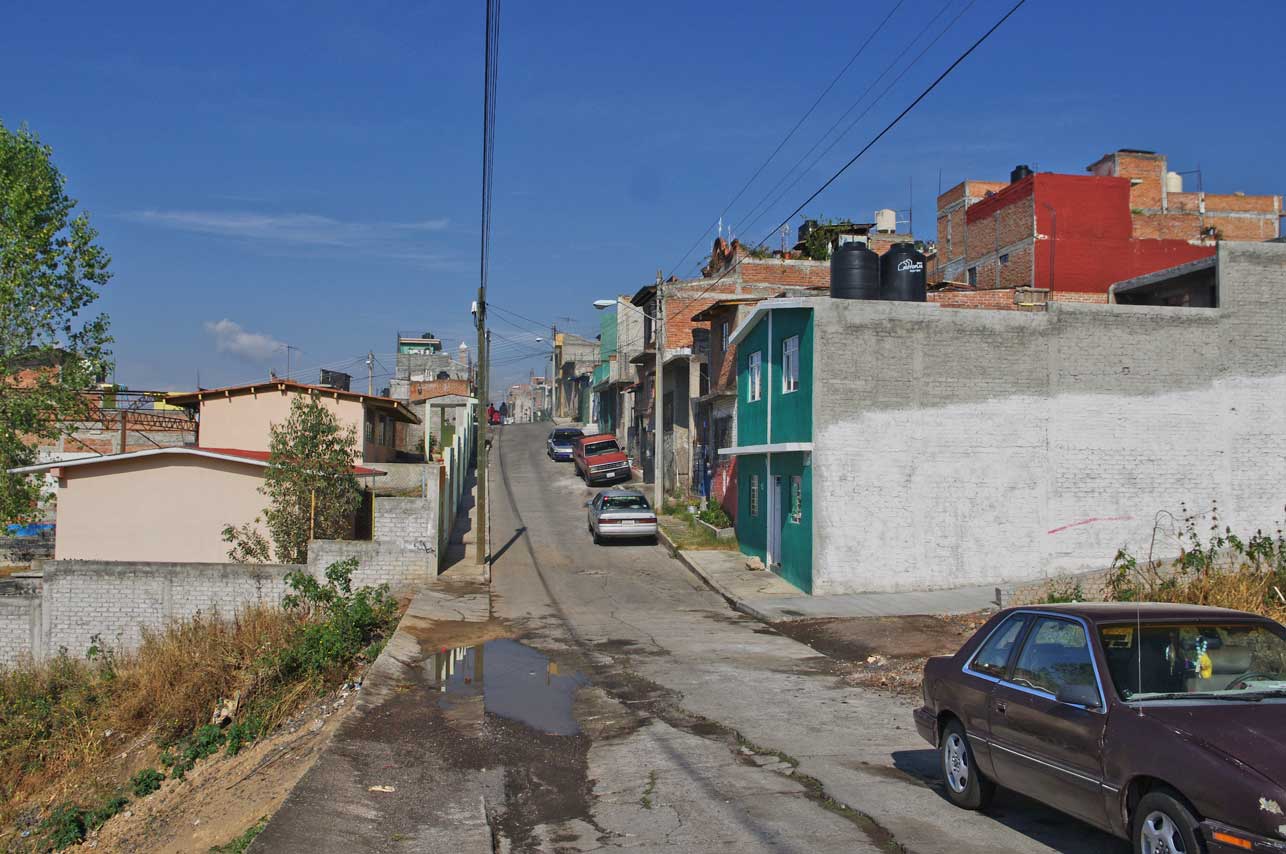 This is a street above private home developments and where the victim’s home will be. His home is a bit out of place in this area but it shares with them a stunning view of Morelia and… no record of people coming and going. 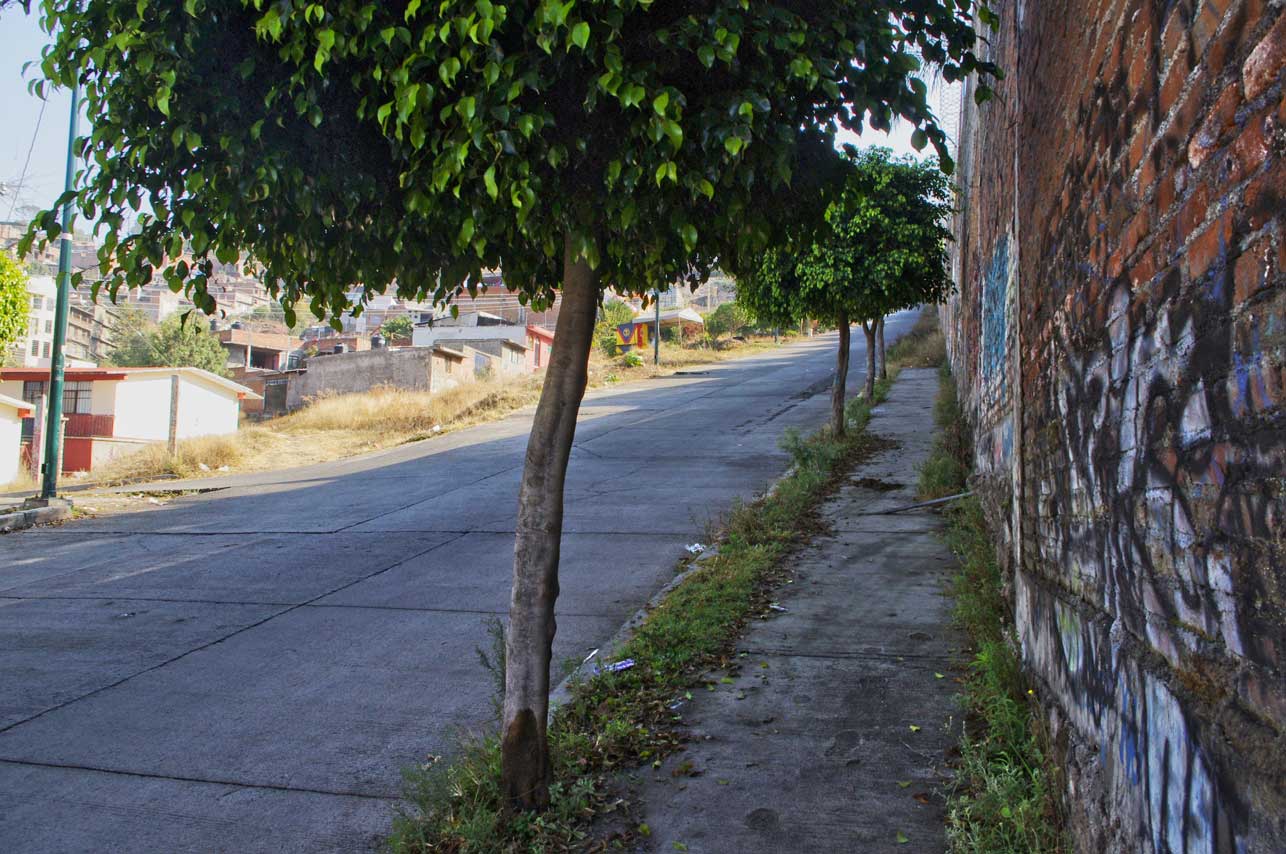 From here the lookout can see cars coming at a great distance in every direction. He can walk across the school yard to the left and can see the home he is watching from this spot. 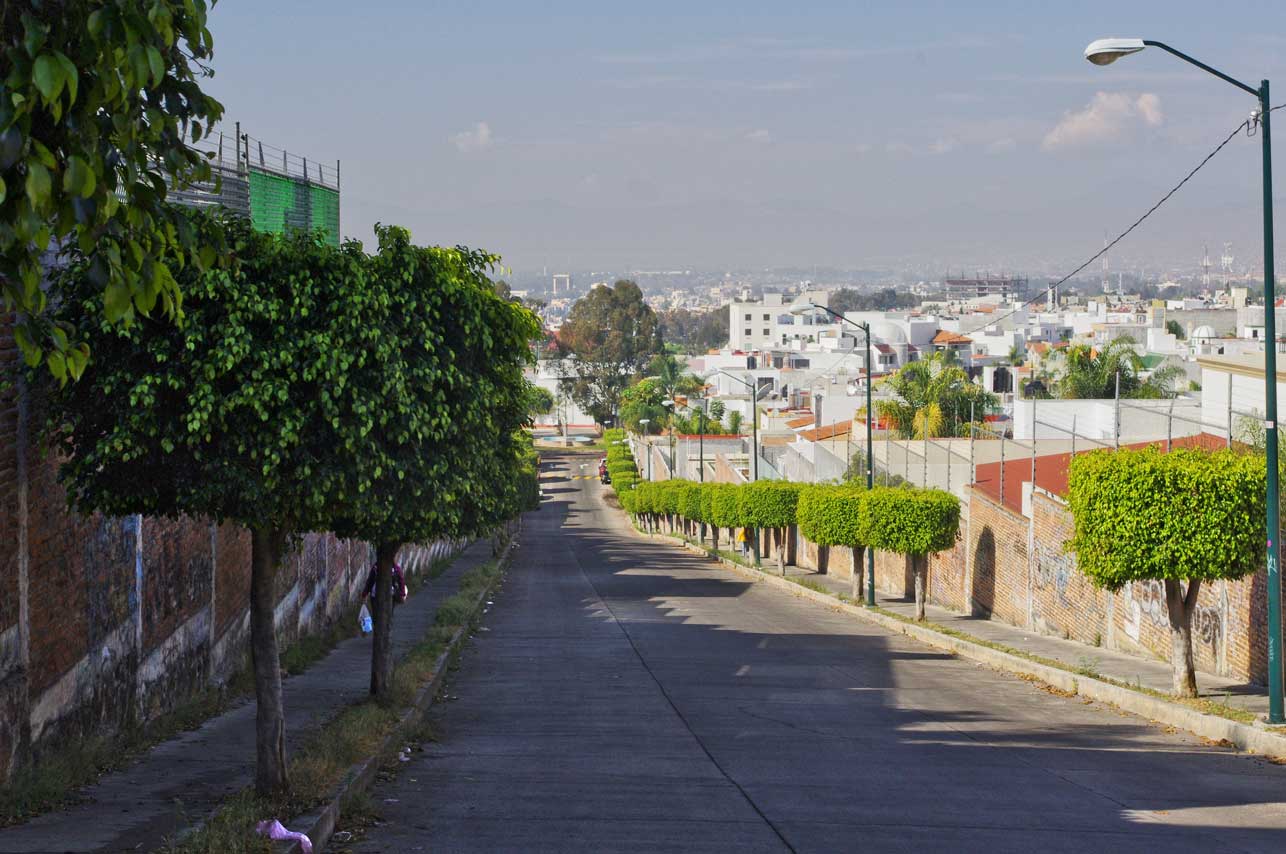 The view down the long hill from where the lookout will stand in the story. You can get a sense of the climb. Also, if you look for the building frame going up in the upper right of this picture, you will see where I started my walk on this morning. You will see a close up of this building at near the end of this series. 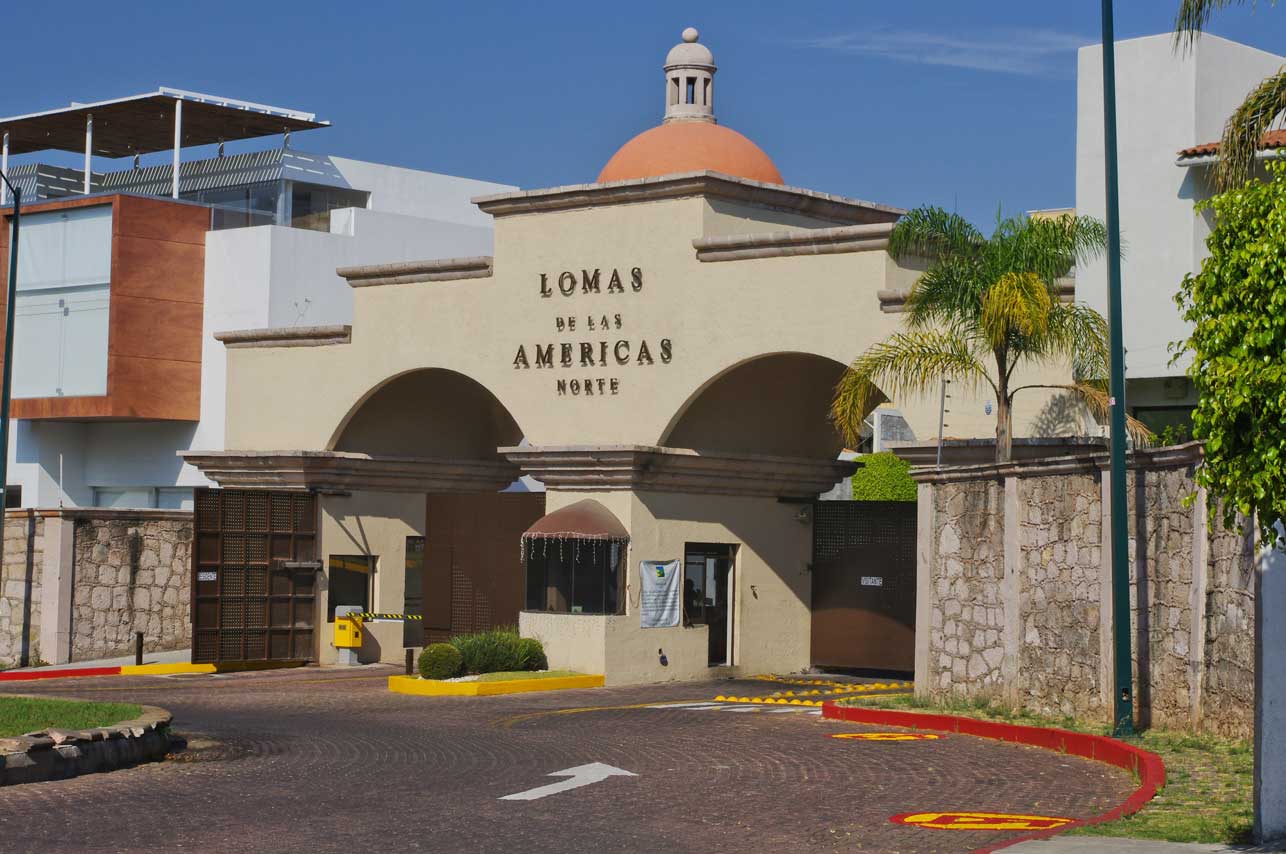 The entry to the Loma de Las Americas Norte. The killer in the story will go back down the hill in the previous picture and then around the circle again, this time on the Norte side. 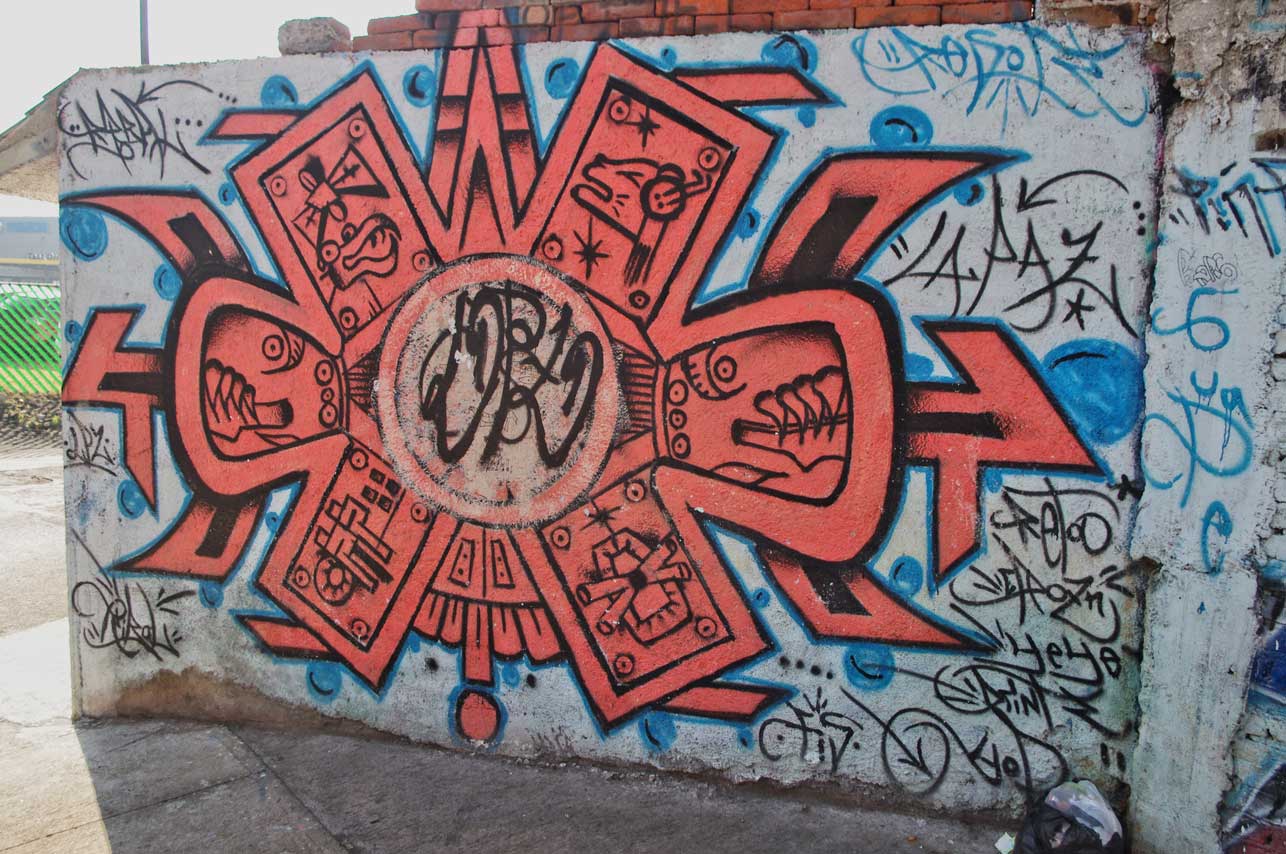 This street art brings us across Periferico and to the area where the tamale vendor lives in Chapter two. This is only blocks from the posh homes of the Lomas but quite a different area. This area is home to taxi drivers, small business owners and people who get by, but generally don’t have the luxuries of their neighbors just across the way. 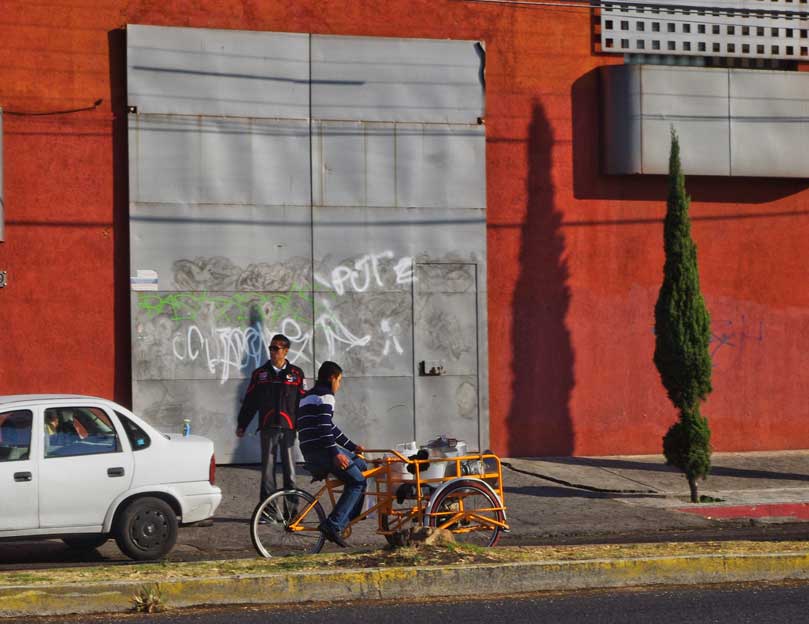 This is the type of three-wheeled bicycle the tamale vendor will ride in the story. The large pots are on a platform between the two front wheels.  The handle in front of the rider is what he uses to steer the cart. He just has simple coaster brakes if he needs to stop.  I see this young fellow several miles away each morning as I head to work near where he starts his daily route. I was surprised to see him here but glad to have an example of the bicycle to use. 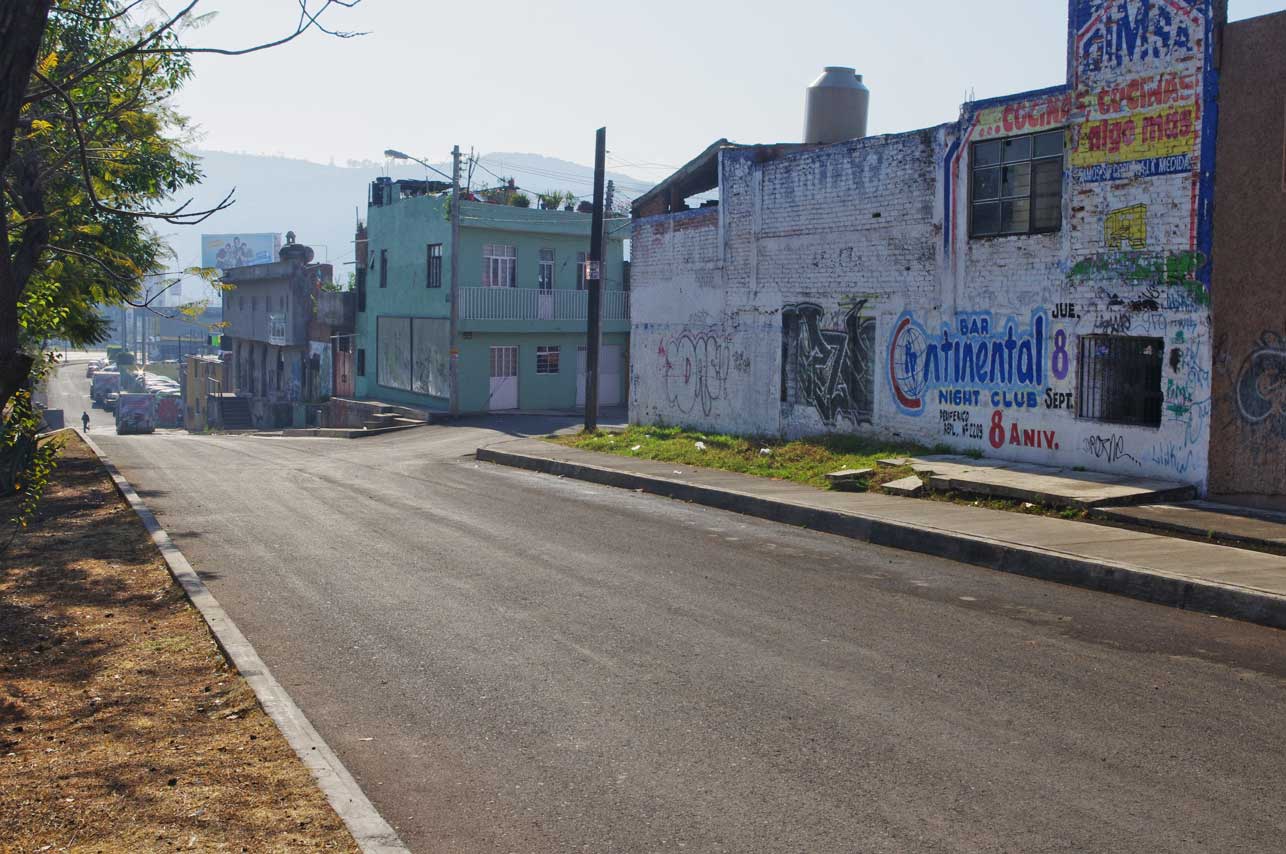 Most busy roads in Morelia are divided and have lateral side roads that are used to access homes and local businesses. This is the road I imagine the tamale vendor starting down in the morning in Chapter two as he leaves with a pot full of tamales toward his restaurant. You might be able to make out the street art in the previous picture near where the young man is walking across the street on the left side of the photo. Don’t get too caught up in an imaginary story now – this is location scouting! 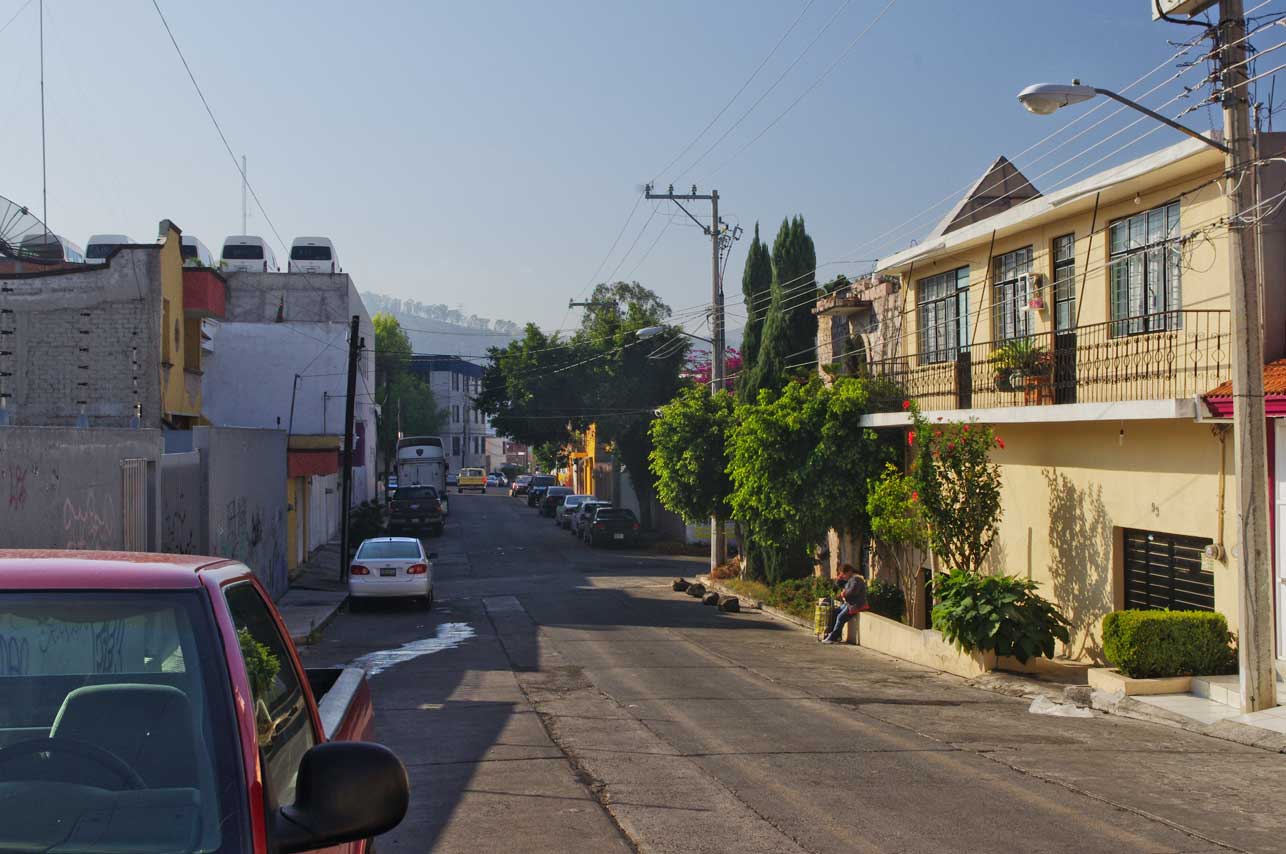 Where the mural is in the previous picture, the tamale vendor will turn and head down this street toward Acueducto and the road along the isde of the prison. It is a long slow angle, not hard for him but with the weight of the tamale pot, a bit challenging to maintain control with only coaster brakes and limited maneuverability. 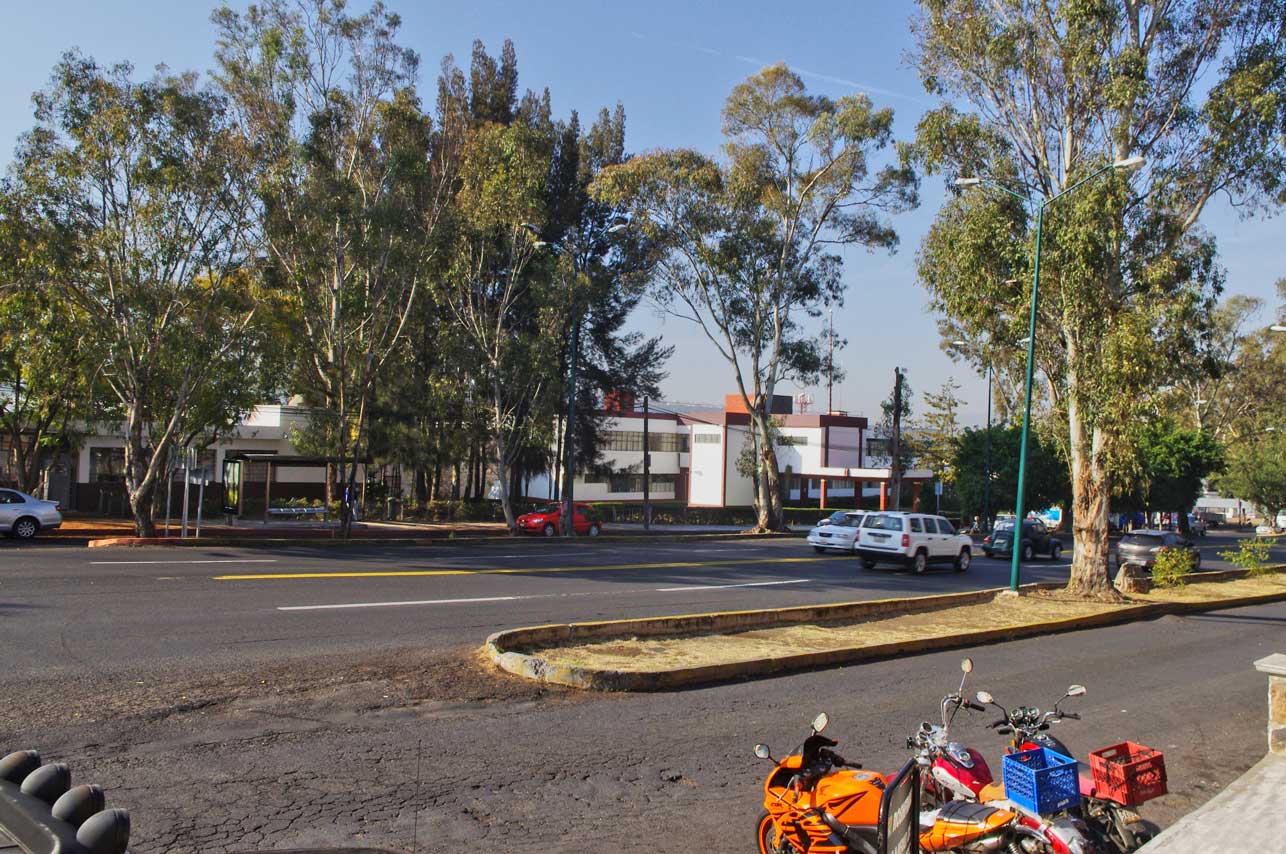 This is the front of the prison as the tamale vendor sees it as he starts to cross Acueducto in the story. This is a very complicated crossing with lateral streets on each side and a very busy intersection just a block away. In the mornings, this is quite busy although you wouldn’t know it at the moment this picture was taken.

This is where the tamale vendor dies in Chapter two. Where the motorcycle rider is waiting on the left, is where the street in the previous picture picture spills out onto Acueducto. The accident happens in the middle of the road in front of the Toyota dealership. 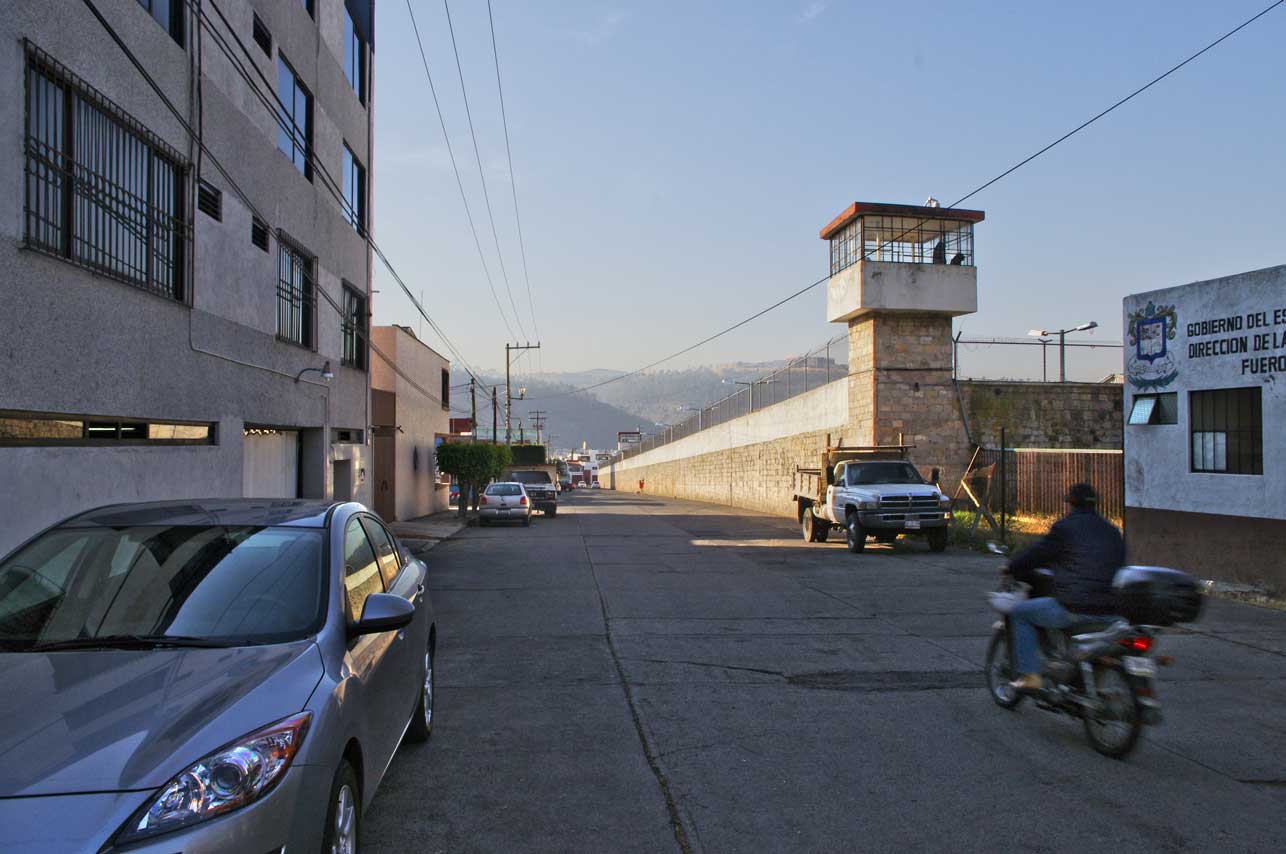 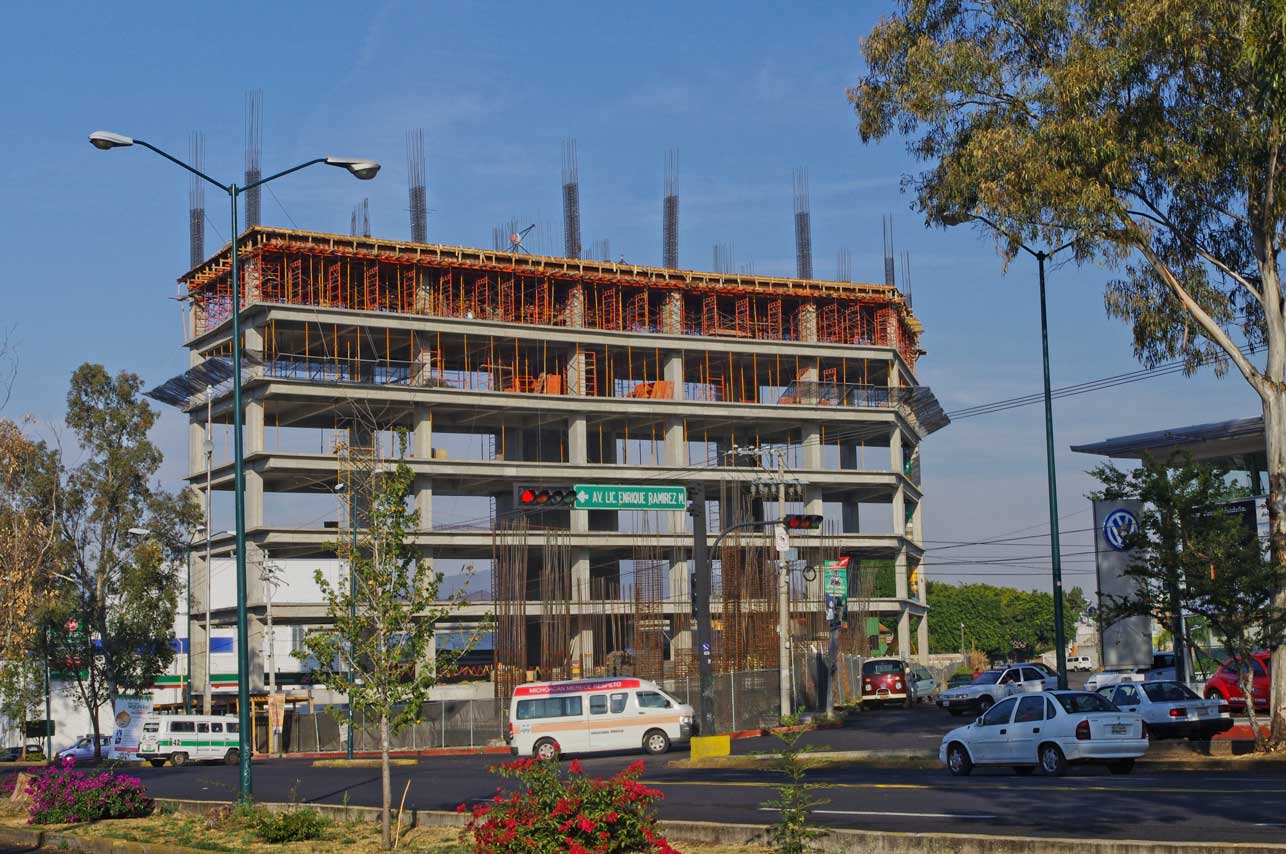 Chapter three begins as my walk did, near this new building. it is the same one I pointed out in the long view from the top of the hill on the other end of the walk. Here the main character will start his walk toward the morning’s events.

So – that is a location walk and some insight into how this novel will open. I can’t tell you how interesting it was to see what I had imagined in my earliest draft take shape. There is still a lot to work on, but this gives me a grounding in the real locations and atmosphere of the setting. Stay with me. There is a lot more to come as the novel unfolds and I’ll keep updating as I work.