There have been so many little moments lately it has been hard to catch up – but this entry will bring together several that I have been wanting to mention, but just haven’t had the chance. The photographic style I have been working on since I changed cameras and my processing system seems to have come together and these photos represent that change strongly. 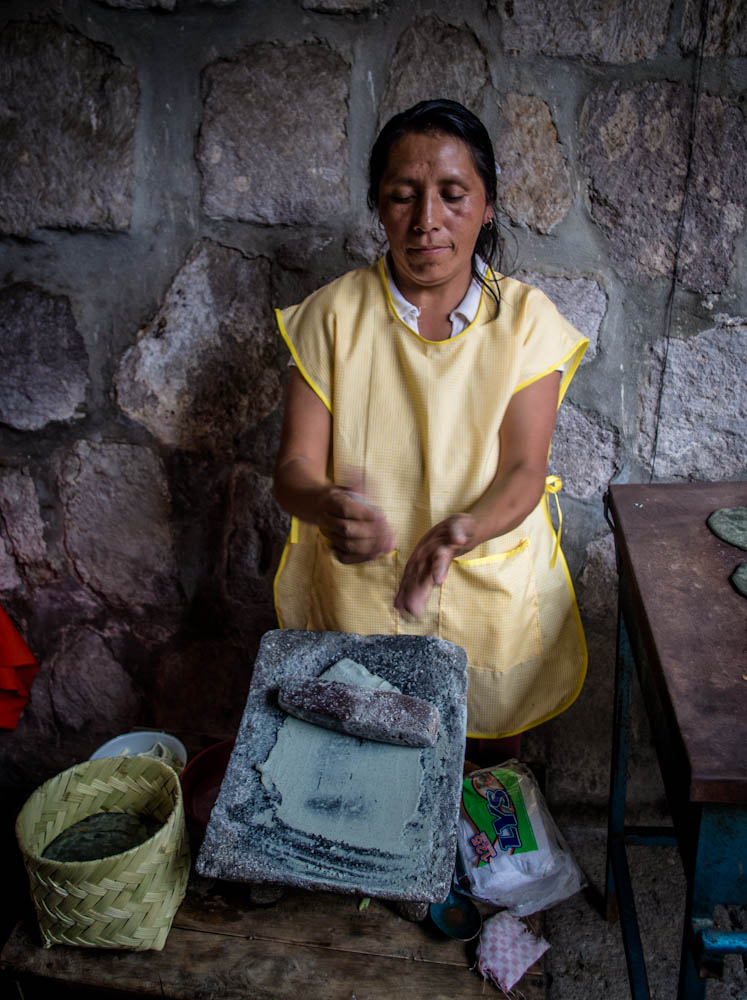 This lady is making blue corn tortillas by hand at the organic market a couple of weeks ago. In front of her you see her matate, the traditional grinding stone for preparing masa.  Her hands move quickly and expertly as she pats out the dough and then plops it down on the griddle next to her. She also had wonderful corundas and some nice bean tamales wrapped in banana leaves. I took some home and enjoyed them for breakfast with my morning coffee… Oh yes… 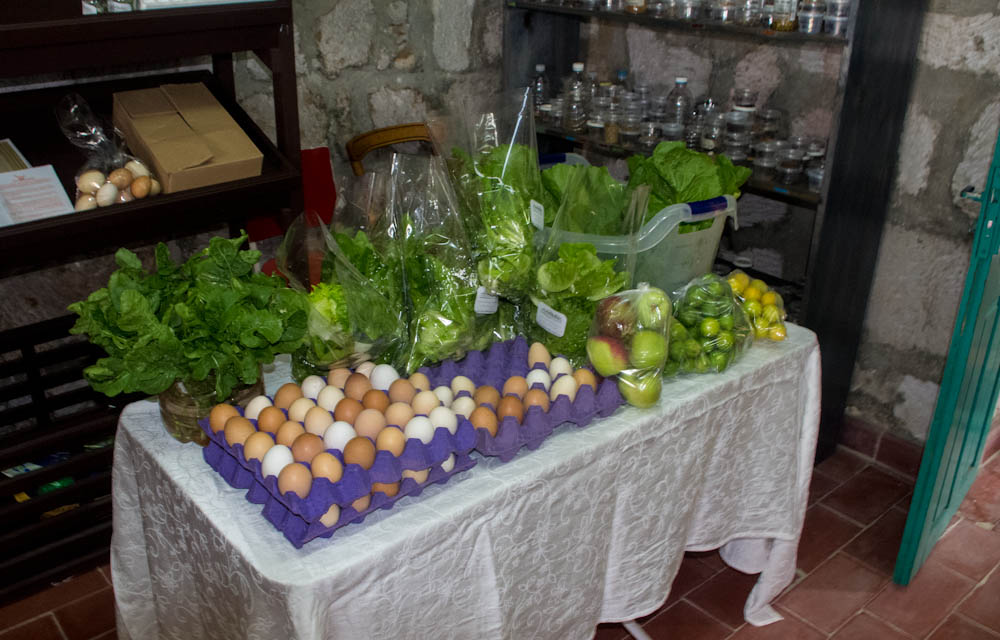 Organic market display – if nothing else, there is a simple casual feeling to the market in Santa Maria that is always attractive. I enjoy my twice monthly trips up there quite a bit. I didn’t go this weekend – this is from the market two weeks ago. I stayed home , but it gave me a chance to bring you these moments. 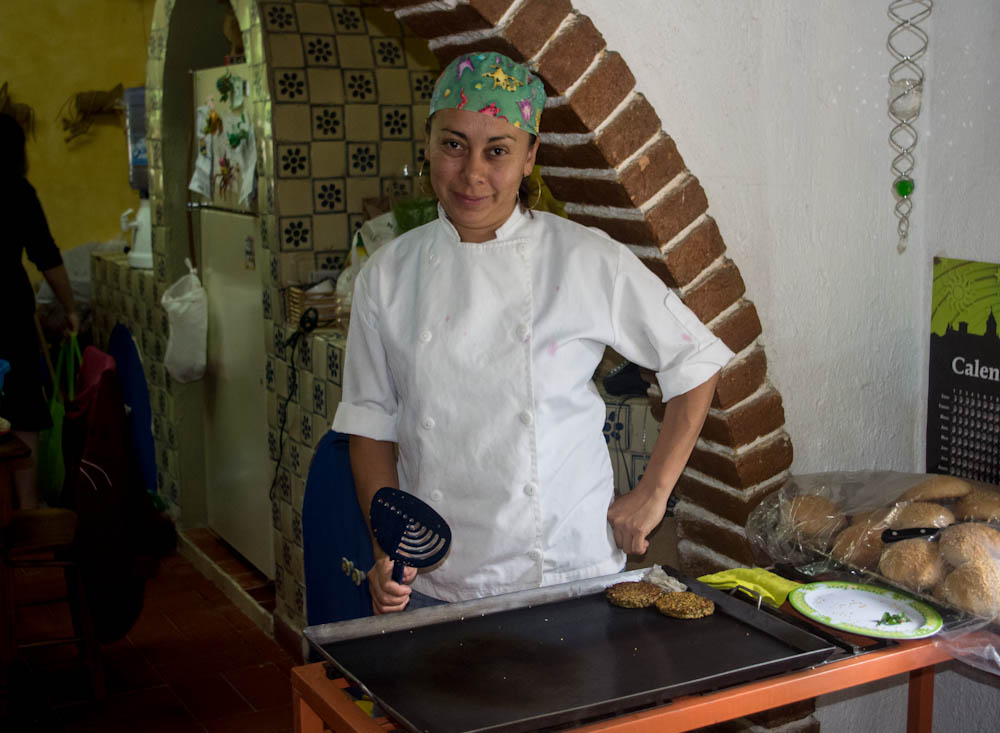 I had a wonderful vegetarian hamburger made of lentils that this lady kindly prepared for me. I hear they had several different kinds this week. I enjoy the change a vegetarian meal brings from time to time. And we have quite a few interesting choices here. 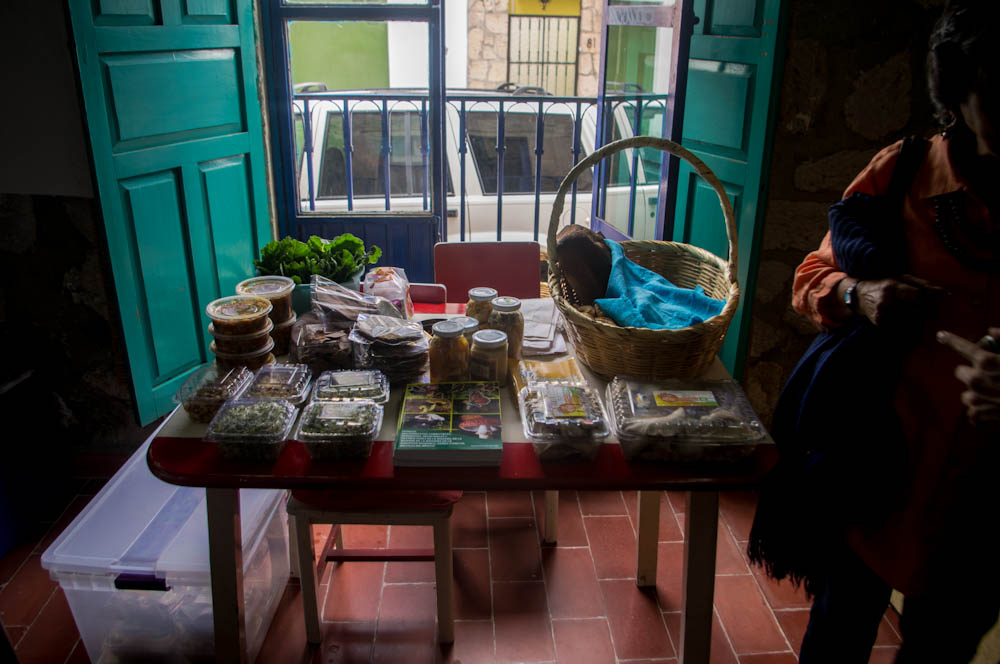 It is the rainy season here, so it is not unusual to have overcast and cool mornings as we did on this market day. This is a display of a wide range of products, some fresh as grown and some prepared. I bought a jar of nopales en escabeche that are great as a condiment with tacos or fish.

Switching gears – recently I had a chance to meet people from the local jazz scene here in Morelia and it has been a very satisfying experience. I went to a concert at the Teatro Ocampo in Centro to hear JC Cortes and his Blues Band for their CD release concert. He plays Rockabilly style blues and has brought together a very good, small group from around Morelia. It was an enjoyable evening, made even more enjoyable by the fact that it was a free concert in one of the best theaters in Morelia.

Trombone, drums, guitar (Juan Carlos Cortes) and base make up the simple four piece group that is the JC Cortes Blues Band, but they make a lot of sound out of the combination. And they gathered a very enthusiastic audience – it was nice to be a part of the evening. 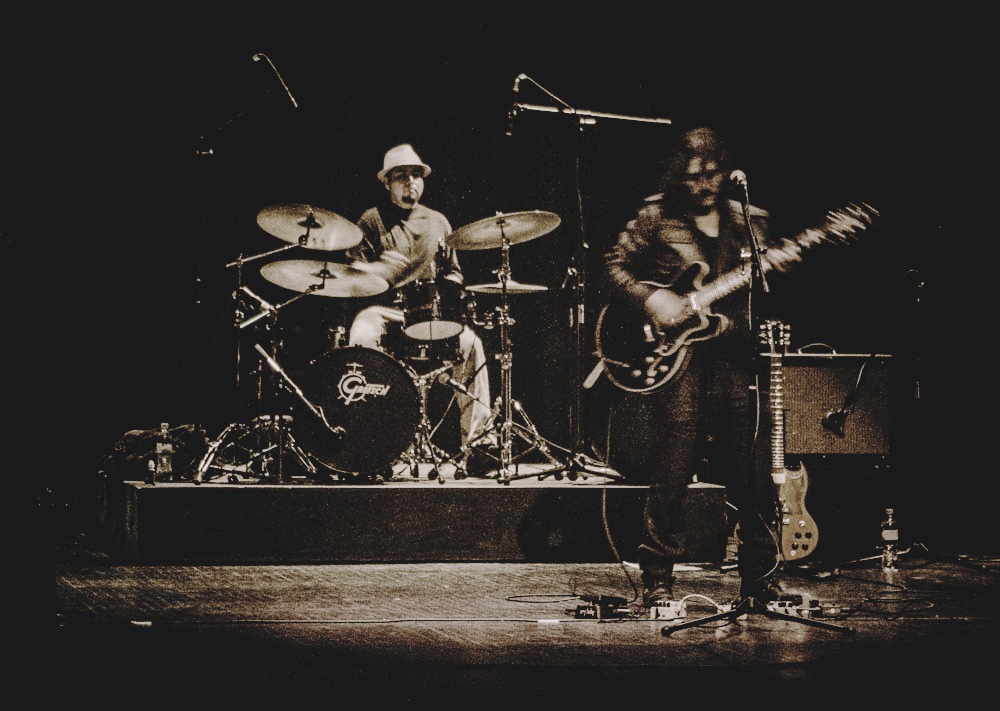 A little more “rock ‘n roll” approach to the concert and since this style of blues forms the base of much of rock and roll, it strikes me as quite appropriate. 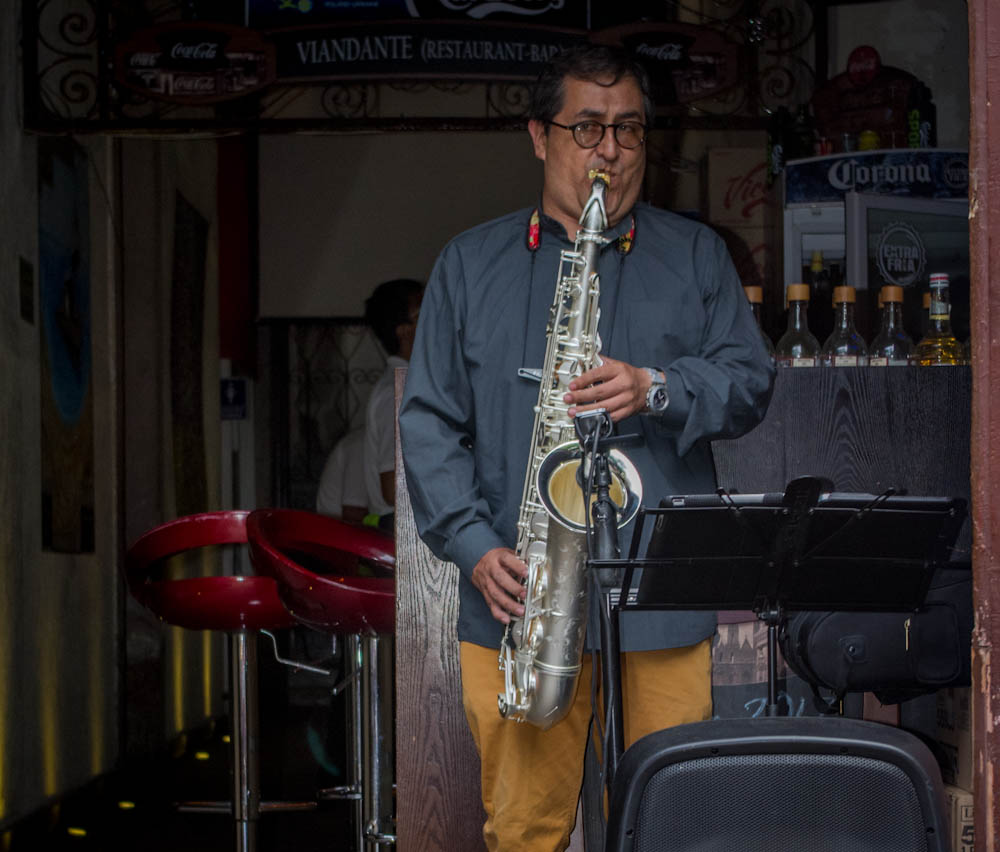 I did mention we were switching gears… This is Juan Alzate, playing his sax on a Saturday evening at the popular Plaza de Las Rosas. You remember Juan right? You saw him in this entry just a little while ago. He is well-known and deserves the accolades – he has brought jazz to many students and the city with style and grace.

We also have an active live theater scene in Morelia. The evening I went to Cafe Amati to have a few beers with friends, I was invited to the Teatro Corral de la Comedia just up the block and across the street from Teatro Ocampo. I have passed the Corral de la Comedia many times on my walks through Centro, but I never had a chance to stop in. The Teatro is an institution in Morelia and has a regular troupe of actors that appear in the shows, much like small theater groups in the US. This evening they were between shows – having rehearsals and taking care of show business. 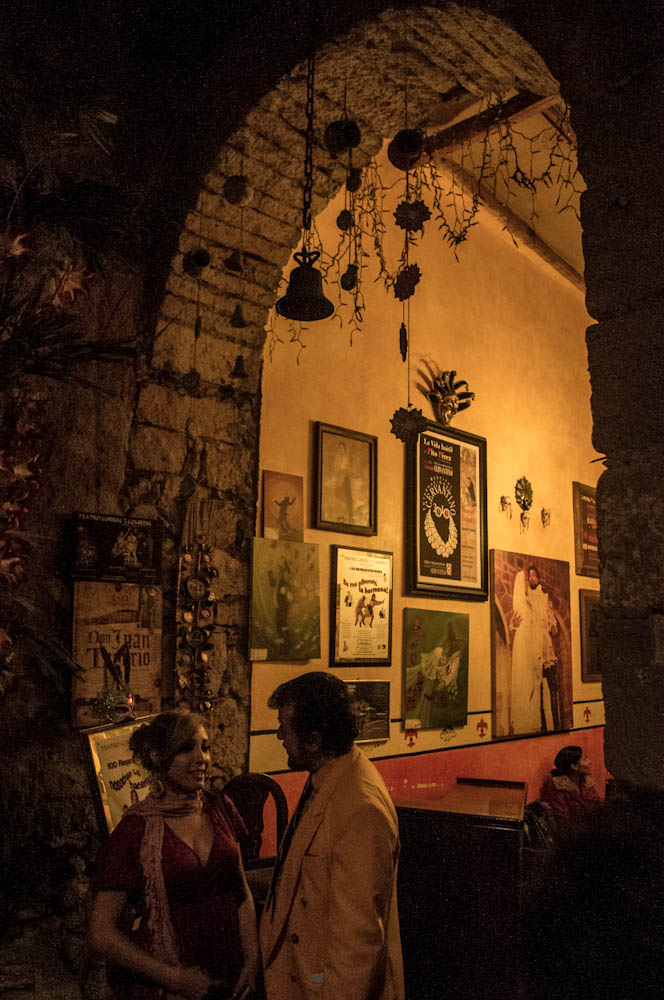 Two members of the troupe of the Teatro Corral de la Comedia in the entryway of the theater. 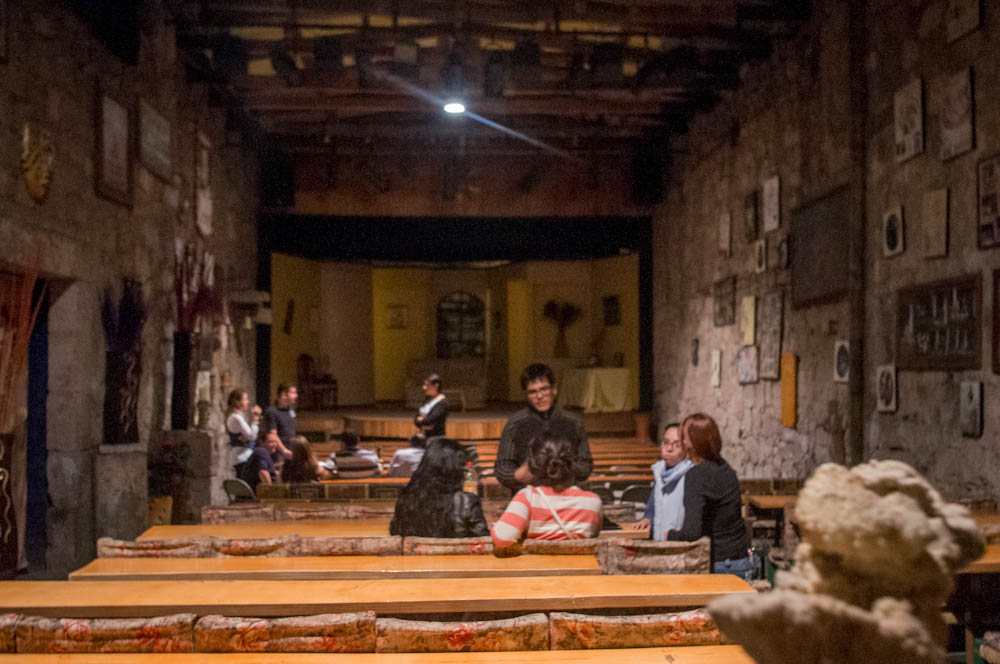 The Teatro is a “little theater” in the tradition of community theater groups around the world. There are no fancy stagings, no booming sound system – just a small, intimate theater with a lot of dedicated people.

So, I will leave you with some flower pictures I took in a friend’s garden because – well – I enjoyed taking them and maybe you will like them too. They are just a few more momentitos en México. For me, México and Morelia is not about the big trips or fancy places I see – it is all about these moments.

These aren’t much bigger than a quarter, but very showy in the right light.